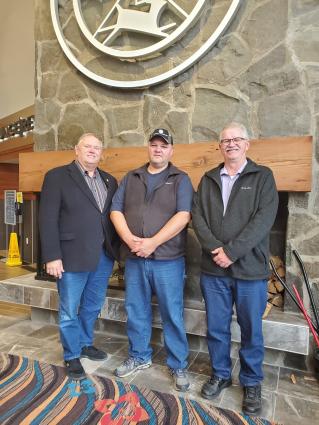 Although the Grand Portage Band of Lake Superior Chippewa recently sent a letter to the Cook County Chamber Of Commerce
admonishing the chamber for not understanding the rights of the Ojibwe people under the Treaty of 1854, the two entities sat down Oct. 30 in Grand Portage to talk together and with other community members on a number of issues.

The letter to Jim Boyd and the chamber from the Grand Portage Tribal Council followed a letter the chamber submitted to the U.S. Forest Service, urging it to move ahead with a special use permit for Lutsen Mountains to add ski runs, lifts and services on approximately 500 acres of land. The chamber stressed the need for economic growth, stating that the Lutsen ski hill needed to “expand or die.”

Comments from the chamber revealed vastly different thoughts between business leaders and the three Ojibwe bands–Boise Forte, Fond du Lac, and Grand Portage. The bands have a particular interest in the use of the land as signatories of the Treaty of 1854, which created the 1854 Ceded Territory.

Despite the difference–Grand Portage Band and the other 1854 Treaty bands strongly disagree that this is a good use of the land–there was no discussion of the chamber’s stance at the Saturday meeting.

Remarks from all entities at the meeting were primarily for the visiting legislators, District 3a Rep. Rob Ecklund and state Senator Tom Bakk.

Cook County Administrator James Joerke led the meeting with that tone as well and the presentations and discussion that followed remained for the most part informational and encouraging.

The agenda covered updates on various Grand Portage issues, with a meaningful update from Grand Portage Education Director Maria Burnett, who stressed the importance of Indigenous studies for all students.

She shared some startling information coming to light about 16 residential schools in the state of Minnesota. Deschampe said Grand Portage is working with the Catholic Archdiocese to learn more about the treatment of Native children in these facilities.

County Commissioner Dave Mills thanked Burnett and Deschampe for bringing that information forward, noting that this is a painful discussion, but one that needs to happen.

Grand Portage Director of Biology and Environment Seth Moore spoke about the loss of 1854 Ceded Territory lands to mining, roads and highways. To the legislators, Moore expressed concern about the school trust lands in the Boundary Waters Canoe Area Wilderness and the US Forest Service proposal to exchange those parcels for lands outside the BWCAW—which could lead to more development and thus, more loss of ceded territory.

RTC Secretary-Treasurer McCormick spoke about the economic challenges of the pandemic, noting that the lodge and casino and other enterprises are what fund critical community services in Grand Portage, such as elder care and youth programming. McCormick also stressed to legislators that tribal consultation is difficult in some agencies. She asked legislators to ensure that tribes are “at the table,” especially on discussions that impact the environment.

There was quite a bit of discussion of the state’s establishment of a program of intergovernmental training. Iron Range Resources and Rehabilitation Commissioner Mark Phillips said the IRRRB is expecting all of its employees to participate in this training, which he said is invaluable.

There was consensus among attendees that mental health care is a critical need in rural Cook County and Grand Portage. Talking about activities at North Shore Health, hospital CEO Kimber Wraalstad definitely agreed this is a problem, noting that hospital staff can spend hours—and even days—seeking beds for many different types of patients, and then transporting them.

Housing and childcare were issues also dubbed a top priority for all the organizations involved.

In addition to problems with the rural medical systems, there were many statements of congratulations for the handling of the COVID-19 pandemic. Attendees acknowledged that the pandemic is not yet over, but noted that the local medical and public health community had collaborated and done an excellent job keeping the virus at bay as much as it could.

As things wrapped up after 2 p.m., County Administrator James Joerke asked the guests of honor for their final thoughts.

Commissioner Mark Phillips of the IRRRB spoke a bit about how the process of applying for grants from his agency had changed to be more competitive and with a more specific criteria for applying. He noted that Cook County had received some significant grants. Hear Phillips’ closing comments here.

Senator Tom Bakk thanked the community leaders in attendance at this meeting – and the meeting the day before at the Lutsen Town Hall. Hear Senator Bakk’s closing thoughts here.

Representative Rob Ecklund had two thoughts. He spoke of the importance of government-tribal relations training and he commended the county for working together through differences. Hear Representative Ecklund’s closing comments here.

In his closing remarks, Chairman Deschampe also encouraged everyone to attend tribal-state training. He said Grand Portage takes its treaty rights very seriously and is doing its part to educate the public on the Treaty of 1854.

Deschampe thanked everyone for coming and said this is the way everything should be handled, by coming together in a positive manner, face-to-face. Finally, Deschampe said there is no Ojibwe word for goodbye, but rather a word that translates to “See you later, or giga-waabamin. Hear Chairman Deschampe’s closing thoughts here.