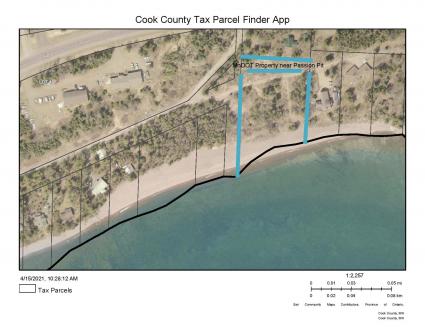 The Grand Portage Band of Lake Superior Chippewa submitted an official request to the Minnesota Department of Transportation to obtain land just east of Grand Marais in an area commonly known as ‘Passion Pit.’

Tribal Chair Bobby Deschampe shared this information during a meeting of the Cook County Board of Commissioners April 13.

The Passion Pit area located off Old Shore Road has been used by local residents and tourists as an access to a small beach on Lake Superior. As the land is potentially for sale, there has been some interest expressed in maintaining the property in public ownership due to its historic connection with the old Chippewa City area and heritage, and as a local access to the beach, according to Cook County Administrator James Joerke.

Duane Hill is the district engineer for MnDOT’s District One, which includes Cook County. He told WTIP April 15 that many details need to be sorted out regarding the request from Grand Portage to take ownership of the property.

“MnDOT has not yet determined specific details about how the transfer could or would occur,” Hill said.

Included in the unknowns is if the Grand Portage Band would need to purchase the property from MnDOT should the deal move forward, or if it would simply be given to the trust lands to be managed and owned by the band.

Hill acknowledged that the band’s request is neither a guarantee the deal will get done, nor a requirement. However, it is permitted under certain state statutes, he added. The statute Hill referenced reads, in part: The commissioner may convey… any lands, including any improvements thereon, owned in fee by the state for trunk highway purposes but no longer needed to any political subdivision, Indian tribal government, or agency of the state upon the terms and conditions as may be agreed upon between the commissioner and the political subdivision, Indian tribal government, or agency.

If an arrangement moves forward with Grand Portage for the MnDOT property, Hill said there is not yet a timeline for when it would take place.

“There are several discussions that need to occur, including gathering parcel information and any other applicable legal requirements,” he said. “We are beginning these conversations internally and will stay in contact with Grand Portage about their request.”

In related news, the same day Deschampe spoke publicly about the band’s request to MnDOT, the county board approved an 11-member committee that was formed to determine the best use of the Passion Pit area. For months, Cook County officials were seeking members of the public to serve on a committee that will, according Joerke, assist the county board in determining what to do with the Passion Pit area. A primary function of the newly formed committee was to determine if the county should purchase the property from MnDOT. What impact the request from Grand Portage to MnDOT will have on the county’s considerations to purchase the property remains unknown, based on discussion from the April 13 county board meeting.

After being approved by the commissioners during that meeting, the committee includes representatives from local government, the historical society, nearby property owners, as well as members from Grand Portage and historic Chippewa City family descendants, among other local residents. To view the full list of the committee members, click here.

The Passion Pit Advisory Committee committee has been set up for a 12-month period of time that would start from its first meeting date, which is anticipated to take place in late April or early May, according to Land Services Director Tim Nelson.

The history of who owns the land at Chippewa City, as well as the Boundary Waters Canoe Area Wilderness and the North Shore area, has come into question by some community members in recent times, particularly in the past year. A group of community leaders – including elected officials, administrators and members of the Grand Portage Tribal Council, coming together under what is sometimes referred to as the ‘joint powers committee’ – have spent time drafting a land acknowledgement during the past year.

As the group continues to discuss how the statement will be used by any groups or institutions that adopt it, in terms of the contexts in which it is read or published, and how it translates into policy and action, more recently, activists and others are using the term “stolen land” when referencing white settlement in the region.

The audio below is Deschampe sharing news about the request from Grand Portage to MnDOT during the April meeting of the Cook County Board of Commissioners.

This article was updated April 19 to include a draft version of the land acknowledgement.