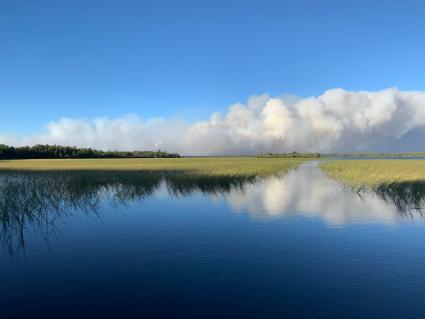 Greenwood Fire and BWCA fires continue to burn, rain in the forecast

After a challenging week to control the largest fire burning in Minnesota, the Greenwood Fire has now burned nearly 26,000 acres and remains zero percent contained as of Thursday morning.

Favorable conditions Wednesday allowed firefighters to make some progress fighting the fire, according to Patty Johnson, the east zone fire management officer for the Gunflint and Tofte Districts. Fire crews took advantage of various weather conditions, particularly wind direction, to initiate tactical firing operations on the west and north sides of the Greenwood Fire. This effort is intended to improve containment of the fire by reducing fuels along existing barriers such as roads, according to the Forest Service.

Crews will return to these areas today to begin the process of hardening the line by ‘mopping up’ hotspots within the burns initiated along segments of Highway 1, Lake County Highway 2 and the Jackpot Lake Road, according to an update from fire officials this morning.

A public meeting is planned for 6 p.m. tonight at the Wolf Ridge Environmental Learning Center in Finland to share updates on the Greenwood Fire and other wildfires burning in the region.

To date, the Greenwood Fire has destroyed at least a dozen homes or cabins. Numerous other structures, including sheds, garages and storage buildings, have also been destroyed by the fire.

In more wildfire news from the region, the John Ek Fire is now at an estimated 1,800 acres in size, according to an update Johnson shared Wednesday night at the Tofte Town Hall.

The Gabi Fire burning southwest of Seagull Lake in the BWCA continues to burn and grow as well. That fire is now at approximately two acres, according to Johnson, up from about .5 acres on Tuesday.

Firefighting crews made significant progress using aerial water drops on the Whelp Fire this week. The Whelp Fire is northwest of Sawbill Lake in the BWCA. It is an estimated 50 acres as of Thursday morning. Firefighting crews were being sent into the area Thursday to set up a camp and take action on the fire, according to the Forest Service.

Many of the resources and decision makers involved with the Greenwood Fire and some of the other regional fires are currently based out an incident command post established at the Isabella Community Center. As the Greenwood Fire continues to burn near Highway 1, the Forest Service is considering moving its base of operations to coordinate firefighting activity to a new location in the region.

Wildfires also continue to burn across the border in Quetico Provincial Park. These fires led to a complete closure of Quetico earlier this month. The fires continue to pose a threat to jump across to the United States, with areas in the BWCA near Ely in the path of the fire if it moves south into the U.S.

Johnson shared an update on these fires during the Tofte Town Hall meeting last night. Audio below

Meanwhile, the National Weather Service is predicting varying amounts of rainfall this weekend across the region. Click here for the forecast near Isabella, and here for the end of the Gunflint Trail.