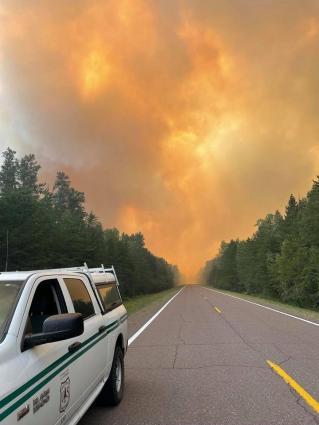 There was little relief from high winds and warm temperatures Friday as the Greenwood Fire doubled in size and is now more than 8,200 acres.

The fire jumped Lake County Highway 2 Friday afternoon as winds continued to gust over 20 mph throughout the afternoon while temperatures again climbed near 90 degrees.

More evacuations were underway Friday as the Lake County Sheriff’s Department informed property owners of the fire’s behavior.
There were no immediate reports of structures being lost or even impacted by the fire, though fire maps provided by the U.S. Forest Service show structures are now extremely close to the active fire. WTIP spoke earlier Friday with a property owner in Lake County who owns a lodge on the west side of Highway 2.

At 8:40 p.m. Friday the National Weather Service radar showed rain moving into northern Minnesota. That being the case, the Isabella area is projected to receive less than a tenth of an inch of rain overnight and into Saturday morning.

Firefighting crews are preparing for a windy and potentially hazardous night Friday night and through the morning hours. Fire officials said winds throughout the evening will be in the range of 20-25 mph and there is a possibility that occasional gusts may approach 50 mph around midnight. Winds will shift from the south-southwest to come out of the west-northwest as the weather front moves through the area, according to officials monitoring the Greenwood Fire.

​In more regional fire news, the Forest Service told WTIP Friday night that the John Elk Fire burning inside the BWCA was “very active” all afternoon. Patty Johnson, the east zone fire management officer on Superior National Forest, said the fire was “putting up a column” that BWCA canoeists near the fire “will be able to see.” The fire is located north of Sawbill Lake near Little Saganaga Lake.