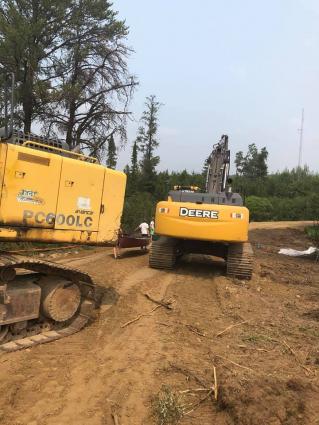 Multiple construction projects scheduled for this summer on the Gunflint Trail are sparking concerns among some residents of the iconic roadway that winds from Grand Marais to the edge of the Boundary Waters Canoe Area Wilderness.

Culvert replacements are scheduled at Larch Creek and Seagull Creek this summer, with traffic rerouted to a one-lane bypass at both locations. Work recently started at the Larch Creek section of the Trail, bringing concern from local residents and confusion among some entering the BWCA through the designated entry point to the wilderness. Some of the concerns expressed by community members include environmental impacts on surrounding wetlands, the size and scope of the project and the overall cost of the project.

The cost of the project came in significantly higher for both the Larch Creek and Seagull Creek culvert replacements. The highway department received one bid at its April 7 bid opening and the Cook County Board of Commissioners eventually approved KGM Contractors to take on the project at a cost of approximately $555,500. Due to the location of the project, mobilization and material costs came in higher than anticipated, Cook County Highway Engineer Robbie Hass told WTIP in April. Hass originally estimated the Larch Creek culvert replacement, something Hass referred to as a ‘bridge replacement,’ would cost approximately $365,000.

Likewise, the upcoming Seagull Creek project came in well over the estimated cost. The commissioners approved this project in April at a cost of approximately $538,700. Hass originally estimated the project would cost $367,000.

Meanwhile, construction is underway at the Larch Creek culvert/bridge replacement. A temporary road was built around the construction site to keep traffic flowing in at least one direction throughout the project. Hass told WTIP on July 13 the only feasible option to keep the Gunflint Trail open during the project was to build a temporary road. Contractors hired to complete the project at both locations are required to leave the site “in the same or in better condition than it was when construction started,” Hass said. For example, the highway engineer said, any areas disrupted by the construction will be reseeded with native seeds specific to northeastern Minnesota. Hass thanked members of the Gunflint Trail Scenic Byway Committee for their support in finding the correct seeds to use in this phase of the project.

Located near Seagull Outfitters and widely recognized as a popular area for outdoor recreation, Hass acknowledged that he was unaware replacing the culvert/bridge at Larch Creek would impact recreation inside the BWCA. Larch Creek is an entry point to the federally-designated wilderness area. Photos sent to WTIP from July 10 show people carrying canoes through an active construction site to enter the BWCA.

Gunflint District Ranger Mike Crotteau told WTIP July 13 that the Larch Creek entry point is temporarily closed due to the construction. This was not a scheduled closure and is a result of the ongoing construction at Larch Creek. Crotteau said the Forest Service is working on redirecting people to other BWCA entry points or providing them a refund.

Work hours for these projects will typically run 7 a.m. until 7 p.m. Monday through Saturday, with completion expected around the end of July. Motorists can expect delays of up to 30 minutes and are asked to obey all signage, the highway department said last month in a news release.

WTIP’s Joe Friedrichs spoke with Hass about the ongoing construction projects on the Gunflint Trail this summer. The audio to their conversation is shared below.