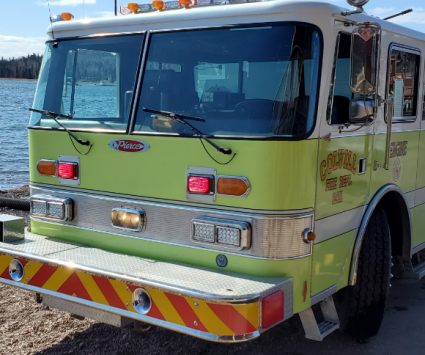 A page went out to the Hovland and Colvill Fire Departments and the Minnesota Department of Natural Resources at 3:46 p.m. yesterday, April 21, requesting help for a brush fire out of control on North Road in Hovland. The initial report said the fire was 50 feet away from a structure.

A few minutes later, the caller said a trailer in the yard had caught fire and shortly after, the fire reached a shed on the property.

The Grand Portage Fire Department was paged for possible assistance in providing water for the fire.

Emergency crews were on scene by 3:58 p.m. The fire was knocked down quickly and at 4:14 p.m., the Grand Portage Fire Department was cancelled. Other fire departments were released from the scene and the Minnesota DNR fire crew remained on scene until 5:15 p.m.

Also responding were the Hovland and Colvill First Responders, Cook County Ambulance and US Forest Service.

The property owner told the Cook County Sheriff’s Office that he had emptied an ashtray into the garbage and didn’t realize it had hot ashes. He observed flames from his garbage can, so he brought the bag outside to get it out of the house. The flames caught the surrounding grass on fire, spreading to the nearby cedar shed.

The shed was a complete loss, but the homeowner said there was nothing of value inside.