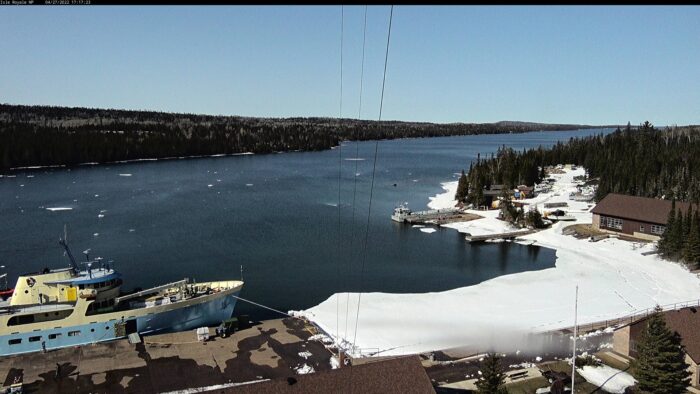 Anglers and adventurers have been watching the ice conditions to see when they will be able to visit inland lakes here in Cook County. But what about another popular spot for hiking and fishing? What are conditions like at Isle Royale National Park, the island about 17 miles off the Minnesota coast in Grand Portage?

Opening things up was delayed. The first smaller opening boat was scheduled to head to the Island on April 21. However, that trip was delayed to April 27 and the landing craft was accompanied by the Park Service’s larger boat, the Ranger III. The two boats made it to Park Service headquarters at Mott Island on Wednesday, April 27. Valencia tells WTIP that they did encounter ice along the way. Some time was spent moving ice to be able to dock the Ranger.

Valencia said there is quite a bit of snow on land, covering icy patches. It is similar to what we see on the mainland, there are spots where paths to buildings are clear and then other spots with waist-deep snow.

No vessels have made it to the Windigo Ranger Station yet. Satellite photos show that the ice is still as far out as Beaver Island, so it will likely be another week or so before the park service is able to get there to open up buildings.

Valencia said it is hoped that the ice will clear so visitors can make it to the Island. The Grand Portage-Isle Royale Transportation Line plans the first trip for the Voyageur II on May 14. The transportation line’s second ship, the Sea Hunter, will begin day trips to the Island in June.

The Isle Royale Sea Plane company plans to offer flights to the Island beginning May 22.

Valencia adds that all of these trips depend on ice and weather conditions.

WTIP’s Rhonda Silence spoke with Valencia about conditions at Isle Royale. Their conversation is below.

For those interestedin a look at weather conditions (or hoping to see an Isle Royale moose or wolf) check out one of these webcams. the webcams only work when a power supply is available.