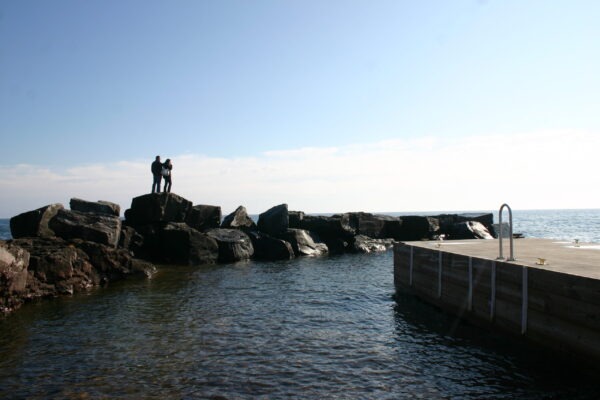 Learning more about wastewater treatment facilities on the North Shore

WTIP Community Radio recently reported on how the Minnesota Pollution Control Agency handled what it deemed a “minor” violation of the Tofte Wastewater Treatment Association’s permit regarding discharge of treated wastewater into Lake Superior. That led to some questions about other wastewater treatment facilities along the North Shore.
WTIP’s Rhonda Silence followed up with MPCA spokesperson Stephan Mikkelson to learn more.

WTIP asked Mikkelson about the operations of those facilities. Is he aware of incidents of these MPCA permitted wastewater treatment plants exceeding the MPCA or Environmental Pollution Control Agency (EPA) guidelines? Mikkelson said he could confidently say there have been no major issues on the North Shore.

He replied, “I’m the lead communicator for our compliance and enforcement. So, I can say, I’m pretty up to speed on our overall enforcement. And none of these facilities that we listed are currently listed for any kind of violations.”

Although it appears that the North Shore has had a history of only “minor” exceedances, does the MPCA consider the cumulative impact of minor events? Mikkelson said the “short answer is yes.”

He added, “Any one incident might be considered minor …Whatever happened, the result of what happened, may have had a minor impact on the environment, or no impact to human health, which is good news. But the PCA keeps track and continually evaluates our waters across the state.

“So, to get to the cumulative question, yes, if we’re seeing through our sampling, that a water body, whether it’s a river or a stream or a lake is not meeting water quality standards, then we would further investigate to find out. Okay, why is it not meeting standards? And what are the possible sources?  We go about it that way to try and minimize impacts so that water body will meet those standards,” Mikkelson explained.

WTIP asked for some clarification on how the MPCA determines a minor versus major violation for a wastewater treatment facility. Mikkelson said it comes down to how the MPCA reviews an incident and which enforcement method it determines is necessary. For example, there could be a record-keeping issue that would be easy to correct. For more serious incidents or violations, he said there are a number of factors to consider.

The MPCA looks at whether a violation has a direct impact on the environment or the potential harm to human health. The MPCA also looks at whether a company or facility benefited by its non-compliance, meaning that they saved money because they didn’t install the proper equipment. The MPCA also considers whether an occurrence was an accident of some sort versus something the facility reasonably knew could happen. Mikkelson said a facility that knowingly violated its permit would face the MPCA’s heaviest enforcement actions.

The data for wastewater treatment facilities and the equations for the allowed amounts of effluent for things such as mercury, fecal matter, coliform, and suspended solids, can be difficult to understand. WTIP asked Mikkelson if he could give a description of what wastewater considered suitable for return to a water body looks like—in layman’s terms.

Mikkelson replied, “You’re right, it is complicated to answer, but I’ll do my best. It’s based on kind of a case-by-case basis, or water body-by-water body basis. Water quality standards are determined by a couple of things like, what is the beneficial use of that water body? Meaning, is it for drinking water? Or is it for swimming and fishing? Or is it just a water body where there really is no recreation? Is it just for wildlife and aquatic life?”

Mikkelson said the size and type of the water body are also considered, noting that there is a huge difference when talking about Lake Superior versus a smaller inland lake. For facilities that release treated wastewater into streams, what water bodies those streams ultimately lead to is considered.

“So, all those factors play into what the standard is for a given pollutant in a given water body,” said Mikkelson, but he agreed to attempt an explanation of how much is allowed, using the analogy of a giant bucket. He noted that much of the criteria for allowed effluents are based on “parts per million.”

He explained, “That would mean, to simplify it, if you had a bucket that could hold a million drops of water then that water body could handle three drops of that pollutant and still meet the standard.”

For anyone interested in looking at the data for the seven North Shore facilities, information can be found on the MPCA website under the What’s in My Neighborhood section.