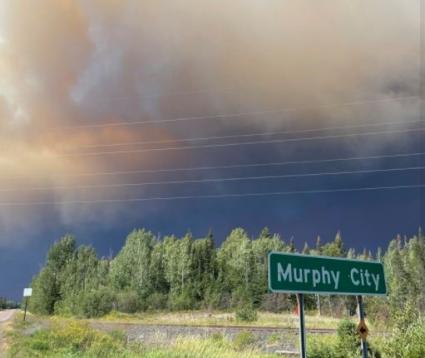 The Greenwood Fire in the Isabella area has reached an estimated 21,720 acres. In an interview on WTIP’s Daybreak on August 25, Tofte District Ranger Ellen Bogardus-Szymaniak confirmed that structures have been destroyed by the wildfire. The Lake County Sheriff’s Office is notifying those property owners. Officials have not yet provided an overall estimate of the damage so far.

In today’s update, the Forest Service explains that Stony River Grade, just west of the Forest Service Isabella Work Center, has been identified as the eastern holding line. Fire crews have also located a more secure location to hold the fire on the southern edge.

Today and this evening, firefighters are conducting several defensive “firing operations” with the support of air resources, engines, bulldozers and other equipment. These defensive fires reduce the burnable natural fuels near homes or near the edge of the fire, in the McDougal area and along the Highway 2 corridor.

Logging equipment continues work on the south side of Highway 1 to selectively remove trees and brush that would carry the fire.
The Greenwood Fire remains at 0% containment.

A public meeting on the Greenwood fire will be held August 26 at 6 p.m. at the Wolf Ridge Environmental Learning Center, 6282 Cranberry Road, Finland, MN. The meeting will be broadcast live on the Superior National Forest Facebook page.

John Ek Fire: The fire is 2.5 miles south of Little Saganaga Lake and extends from John Ek Lake to the SE corner of Elton Lake. The John Ek Fire is estimated to be 1,563 acres in size. Water drops will be performed as necessary if the fire becomes active.

Whelp Fire: The Whelp Fire is a lightning-caused fire located five miles northwest of Sawbill Lake and is an estimated 50 acres. Fire continues to show moderate fire behavior with backing, creeping, and some torching. A helitack crew will inspect and improve the helispot today to prepare for the insertion of firefighters.

In addition, local fire department staff and an infrastructure group of two crews from Alaska and Indiana will be working along the Gunflint Trail to conduct Firewise activities as able.

A public meeting will be held tonight, August 25 at 6 pm at the Tofte Town Hall: 7240 Tofte Park Rd, Tofte, MN.
A recording of the meeting will be posted to Superior National Forest Facebook this evening.

The Gabi Fire is located southwest of Seagull Lake in the BWCA. It is near Gabimichigami Lake and is north of the John Ek Fire. The Gabi Fire was a half-acre in size in a report yesterday afternoon. The fire is being monitored and air resources are being used to contain it as needed and possible.
The Petit Fire is just north of Crescent Lake in Cook County. It is entirely inside the BWCA. It is currently .5 acre in size and a crew is on site working to suppress the fire.

Aircraft were initially used to knock down flames and limit the spread. The crew will continue to be on-site working on the fire. As of 2:45 p.m., on August 24, the fire was mostly contained, according to local fire officials.