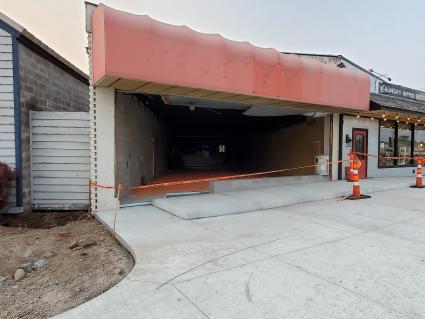 Anyone driving or walking along Highway 61 near the Hungry Hippie Tacos building in recent weeks may have been a bit startled by changes to the small building next door at what was the Dog Haus, a pet supply store. The entire front side of the building is gone.

The Grand Marais Art Colony now owns the small building, as well as the former Arrowhead Pharmacy building. Both structures have a long history in Grand Marais. The former pharmacy was once the Grand Marais Post Office. And the Dog Haus was long ago a dress store, operated by Marvel Soderlund.

The Grand Marais Art Colony purchased both buildings in 2019 after the nonprofit outgrew its space in the old church on Third Avenue. The Art Colony began operations there in 1953 and added on to the building in 2005. There was still a need for more room, which initiated the purchase of the downtown properties.

The renovation of the former pharmacy building, now called Studio 21, is complete and the Art Colony has been having gallery exhibits there. The building is open to the public on Saturdays, 9 a.m. to 4 p.m.

However, as the Dog Haus building was inspected, it became apparent that major renovations would be needed. Grand Marais Art Colony Executive Director Lyla Brown told WTIP that the building was constructed in 1935 and probably last renovated 40 or 50 years ago.

The current reconstruction includes the installation of in-floor heat for more energy-efficient operations. However, that has been a delay as concrete is in short supply as the Highway 61 project wraps up.

Brown assures the public that the front of the building will return, again with large glass windows, as well as a wider door, which will provide better handicapped access. When it is open again, it will be the Grand Marais Art Colony Studio 17. There may be a retail business in the former Dog Haus building.

WTIP’s Rhonda Silence spoke with Lyla Brown about the changes to the buildings and the future use of these downtown properties.