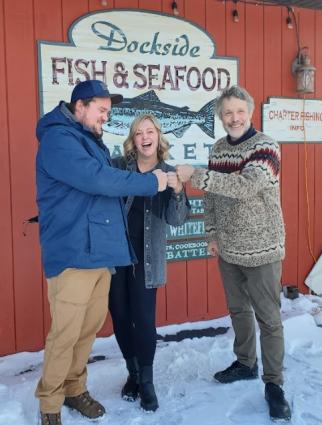 Meeting the new owners of The Fisherman’s Daughter

At the end of January, WTIP shared the news that there would be new owners of The Fisherman’s Daughter restaurant and fish market on the harbor in Grand Marais. Local residents Katie Mumm and Parker Slanga are the new owners and WTIP caught up with them on February 1, the day before they opened the doors as managers.

Mumm’s fiancé, Slanga, is a local electrician, who tells WTIP he is up for the challenge, although he notes that Mumm has the most experience. They both said they feel they can turn to the previous owners for advice and assistance.

The couple will also be relying on Parker’s mother, Stephanie Slanga, who will be their business manager. Stephanie Slanga has a 25-plus year career in the hospitality industry, working for Odyssey Resorts at Caribou Highlands and Mogul’s Grille in Lutsen.

North House Folk School purchased the Dockside Fish Market building in December 2017. At that time, the community was concerned about the future of the market and the restaurant. The public hoped that the business started by Harley and Shele Toftey would continue. That was the case, with North House partnering with Morey’s Seafood Market.

That partnership came to an end in November 2019, leaving Cook County residents wondering if Dockside would close for good.

In March 2020, just before the COVID-19 pandemic transformed the world, North House officials announced the new operators of the fish market, and the name change from Dockside Fish Market, to The Fisherman’s Daughter. However, after a year, the busy Keeble and Tofte-Hedstrom families decided to pursue their other entrepreneurial activities and once again, North House needed to find someone to keep the restaurant and fish market going.

Director Greg Wright said he feels Mumm and Slanga are a good fit, noting that he knew Katie well from many lunch visits for the famed fish and chips at the restaurant. “I’m a fan of great fish and chips too,” he joked.

For their part, Mumm and Parker say there will be no dramatic changes to the menu when they open the doors as operators on February 2. Mumm said they want the transition to be seamless for customers, for example, they will still work with North Superior Fisheries, the commercial fishing business also based in the Dockside building. That business is run by Tyler Smith, Zachary Smith, and Eric Brisson, members of longtime North Shore fishing families.

On the menu will still be the smoked fish, smoked fish dip, and Shele Toftey’s breading on those fish and chips. “It’s going to be the same good place,” promised Mumm.

One change they are hoping to implement is longer, more consistent hours. For now, The Fisherman’s Daughter is open Wednesday through Saturday, 11:00 a.m. to 7:00 p.m.

Rhonda Silence sat down with the new owners in this exclusive WTIP interview.