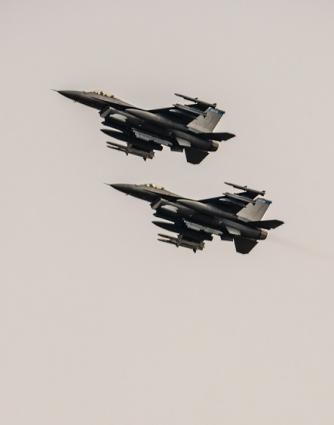 The 148th Figher Wing and Minnesota’s National Guard participated in “Operation American Resolve” on Wednesday, May 13, conducting an honorary F-16 “Fighting Falcon” flyover of medical facilities across the Northland.

The jets flew in salute to healthcare and mission essential workers over Lakeview Hospital in Two Harbors, the Minnesota Veterans Home in Silver Bay, and several hospitals in Ely, the Iron Range and Bemidji areas.

Medical staff at North Shore Health gathered in the parking lot, wearing face masks and standing the appropriate distances apart, to watch the F-16s roar by a little after 11 a.m.

The purpose of the flyover, incorporated into previously scheduled training missions, was to recognize health care workers, emergency responders, food industry and other essential workers throughout the state that have done their part to keep the state functioning during the stay at home order.

“These flyovers are our way of showing solidarity for those who have stepped forward to serve during this pandemic,” said Maj. Gen. Jon Jensen, the Adjutant General of the Minnesota National Guard, in a news release announcing the flyovers. “This is a small way that we can salute those at the forefront of the COVID-19 response for their service and sacrifice.”