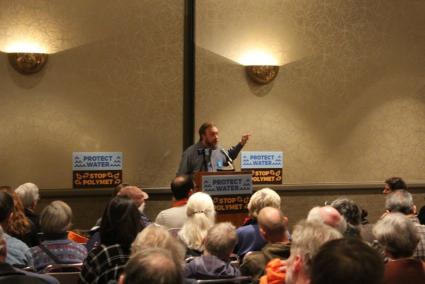 The Minnesota Supreme Court has given a victory to environmentalists in the long-running battle over the proposed PolyMet copper-nickel mine in northeastern Minnesota.

The court on Wednesday sent the dispute back to the state Department of Natural Resources for further proceedings on whether the mine’s waste pond would effectively keep pollution contained.

The Supreme Court also affirmed a 2020 decision by the Minnesota Court of Appeals to reverse the DNR’s decision to grant PolyMet a critical “permit to mine” because the state agency failed to set a fixed term for the permit.

It ordered the DNR to set an appropriate term.

The case was one of several challenges pending before the courts in the long-running battle over the project between Babbitt and Hoyt Lakes, which would be Minnesota’s first copper-nickel mine.

The PolyMet project has largely been the focus of those concerned with environmental issues in the Lake Superior watershed, including the St. Louis River. Another proposed copper-nickel mine in the region, the Twin Metals mine that would be on the edge of the Boundary Waters Canoe Area Wilderness near Ely, is a separate project.

JT Haines is the Northeastern Minnesota director for the Minnesota Center for Environmental Advocacy. He spoke with WTIP’s Joe Friedrichs not long after the Supreme Court ruling. The audio to their full conversation is shared below.