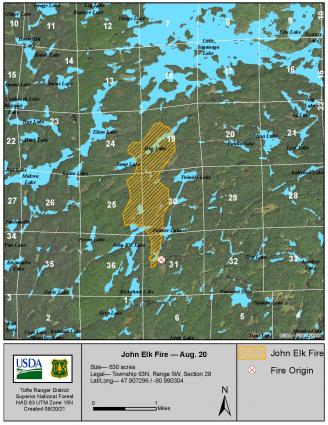 The Forest Service told WTIP the John Elk Fire burning inside the BWCA was “very active” during the past 24 hours. The fire is now estimated to be 1,500 acres, according to Forest Service officials who spoke with WTIP Saturday morning.

The fire is located north of Sawbill Lake near Little Saganaga Lake. It is south of Seagull Lake and west of Tuscarora Lake.

Patty Johnson, the east zone fire management officer on Superior National Forest, said the fire was “putting up a column” that BWCA canoeists near the fire “will be able to see.” Property owners near the end of the Gunflint Trail were also able to see the smoke plume and shades of orange as night fell last night. Johnson said the fire “burned in a narrow cigar shape from John Elk Lake to about a half mile from the southwest corner of Little Sag.”

Forest Service wilderness rangers made contact with campers on Little Sag on Friday, letting them know to start moving out of the area, Johnson told WTIP late Friday night. There was also a crew of Forest Service personnel on Crooked Lake near Tuscarora who were making contacts to have people start moving out of that area. A beaver plane will continue to drop water on the John Elk Fire on Saturday and the Forest Service is sending crews into areas where they know it is safe to make public contacts, Johnson said.