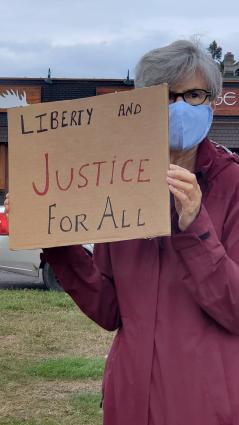 On April 20, a jury in Minneapolis found police officer Derek Chauvin guilty of murder and manslaughter in the killing of George Floyd last May 2020. This has been a difficult time for the city of Minneapolis and indeed, the entire nation, as the trial progressed.
When the guilty verdict was announced, WTIP reached out to the community to hear some local reaction.

Does this death and this trial impact us on the North Shore? How does it impact us? See the related story here: Grand Marais residents express relief, caution as Floyd verdict absorbed

WTIP also wanted to hear from some community leaders, local law enforcement and schools in particular, about this decision.

WTIP spoke with Cook County Sheriff Pat Eliasen to hear his thoughts and to learn more about the efforts to create equity in the justice system. Sheriff Eliasen also answered some questions about the use of police body cameras. Here’s that conversation.

WTIP also spoke with School District 166 Principal/Acting Superintendent Megan Myers about how a critical story like this, as well as others related to racial equity and justice, are handled at the school. Here’s their conversation.