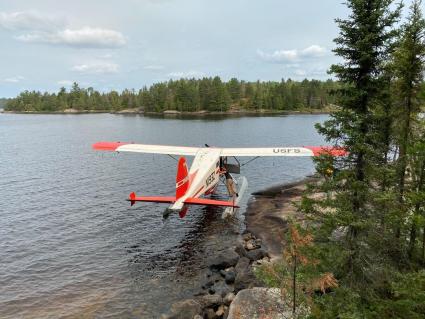 Teams of firefighters with the U.S. Forest Service were purchasing snacks and filling up engines as they prepared to depart downtown Grand Marais late Sunday morning en route to the Boundary Waters Canoe Area Wilderness where new wildfires continue to pop up.

It could be a long, hot and dangerous day in the woods for Forest Service staff in the BWCA and firefighters around the region as low relative humidity and gusty winds create what the National Weather Service describes as ‘near-critical fire weather conditions.’

Patty Johnson is the east zone fires management officer on Superior National Forest. She told WTIP late in the evening of Aug. 14 that two additional fires were reported in the BWCA Saturday. Both fires were started by lightning strikes, Johnson said.

One fire, known as the John Elk Fire, is 2.5 miles south of Little Saganaga Lake in the BWCA. Aircraft dropping water was used Saturday afternoon to cool the fire down and limit the spread, Johnson said. This fire is burning in conifer with dead balsam and old blowdown. It was approximately 1.25 acres in size as of Saturday night.

Another new fire, the Whelp Fire, is located about four miles west/northwest of Sawbill Lake in the BWCA, Johnson said. A helicopter with bucket dropped water of the fire yesterday to cool it off and limit spread. The fire is burning in a hardwood/conifer mix. It was .25 acres in size as of Saturday night.

Temperatures crept toward 90 degrees at the end of the Gunflint Trail and in the BWCA Sunday afternoon. The start of the new week is on track for warm days, including another hot day Monday, Aug. 16. The next chance for precipitation does not come until later in the week at the earliest, according to the National Weather Service.

All campfires are currently prohibited across Superior National Forest, including the BWCA. Violation of the campfire ban currently in place is punishable by a fine of $5,000 for an individual or $10,000 for an organization, according to the Forest Service closure order signed July 9 by Forest Supervisor Connie Cummins.