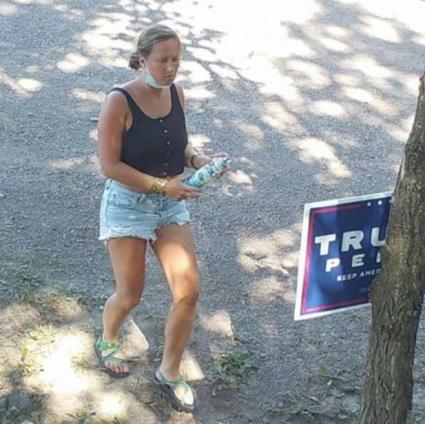 More incidents of political conflict in the county

Despite repeated appeals to community members from Cook County Sheriff Pat Eliasen to be respectful of views that may differ from their own, there continue to be incidents of political conflict here on the North Shore. The latest involve the “smoking” of demonstrators in downtown Grand Marais and another case of sign vandalism caught on camera.

The smoke incident took place on Friday, Aug. 21. It was in response to the Friday evening gatherings along Highway 61. Every Friday evening since May 29, a demonstration has been held there, with participants holding signs calling for justice and equality for people of color.

The first such gathering was held immediately after George Floyd died at the hands of the Minneapolis Police Department. The gatherings have been quiet, with masked participants holding signs and sometimes singing in small groups. The public too, has been mostly accepting, with participants reporting only a few passing cars gesturing or yelling at the protestors. However on Friday, August 21, there was a change in the atmosphere.

Shortly after the crowd assembled, at 5:30 pm., a white pickup drove past and purposely blew smoke out through a modified exhaust.

Participants in the demonstration called the Cook County Sheriff’s Office to report the incident, noting that the truck turned and was parked on a side street above Voyageur Brewing Company.

A deputy responded and after talking to the reporting party made contact with the driver of the truck, Zachary Durben of Delano, Minnesota, who admitted to driving past and sending a blast of smoke out near the protesters.

Durben, whose pickup bears a large “Trump 2020” decal on the rear window, claimed that as he drove by protesters were yelling at him about his stickers. He said that is why he “threw the exhaust at them.”

According to the Sheriff’s Office report, there were no charges for the incident, but Durben was advised to stop.

WTIP Community Radio contacted Cook County Sheriff Pat Eliasen who said, “Under the First Amendment, everyone has the right to express themselves without fear of ridicule or harm.

“If you choose to express yourself, then you must also allow others to express their beliefs and grant them the same respect that you expect from them. It’s a two-way street and just because someone does not believe as you do, does not make them bad or wrong, or make them your enemy,” the sheriff said.

As WTIP has reported, there have been many reports of signs being damaged or stolen, of all political ilk. Black Lives Matter signs have been a particular target, however, signs for candidates—presidential down to local county commissioner races—have also been removed or damaged.

As WTIP previously reported, a heavy homemade Black Lives Matter sign on the Gunflint Trail garnered a great deal of media attention when it was repeatedly tossed into the ditch on the private driveway where it was erected. The property owner caught the individuals on camera.

Regarding that Black Lives Matter sign, Sheriff Eliasen said a citation was issued to the driver in that incident for “Failure to drive with due care.” This is a petty misdemeanor traffic violation and can be paid without a court appearance unless the person cited pleads not guilty.

A camera has caught another incident of vandalism, this time the spray painting of a Trump 2020 sign on private property along County Road 13/Fall River Road. The property owner Jimmy Wallner has photographs of a woman with a can of spray paint, putting a blue X on the political sign. There are several other signs along County Road 7 that have been sprayed in a similar manner.

WTIP reached out to Sheriff Eliasen on this incident of vandalism as well and the sheriff said the case is currently under investigation. He said the sheriff’s office is working on identifying the suspect and when identification is made, he said, “We will definitely be speaking with her.”

The sheriff reiterated his earlier statements, “Any time your personal property is damaged by the intentional act of another, there should be some accountability. As I’ve stated before, if it isn’t yours, don’t touch it and people have the right to expression without fear of threats or property damage.
“It is truly sad when people feel the need to resort to destructive acts because they do not share the same beliefs, and in my opinion, it is completely unacceptable,” said the sheriff. 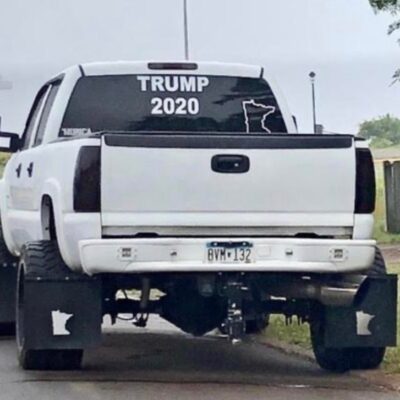 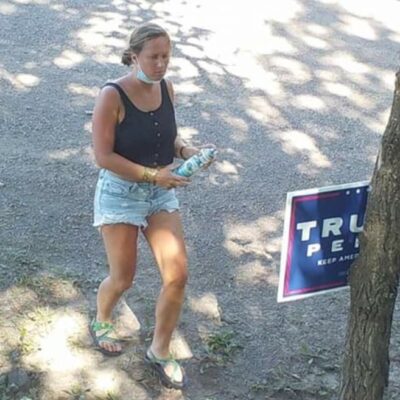