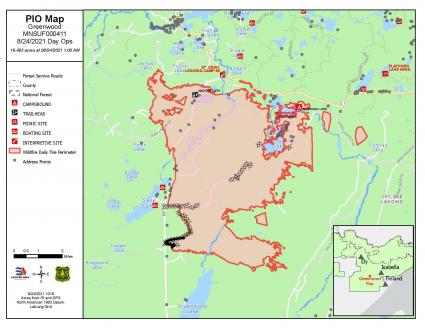 The Gabi Fire is located southwest of Seagull Lake in the BWCA. It is near Gabimichigami Lake and north of the John Ek Fire. The Gabi Fire was a half-acre in size in a report Tuesday afternoon. A helicopter conducted water bucket drops on the fire yesterday. Because of poor access it is currently unstaffed and will be monitored by aircraft.

The Petit Fire is just north of Crescent Lake in Cook County. It is entirely inside the BWCA. It is currently .5 acre in size and a crew is on site working to suppress the fire. Aircraft were initially used to knock down flames and limit the spread. The crew will continue to be on site working on the fire. As of 2:45 p.m. Tuesday the fire was mostly contained, according to local fire officials.

The John Ek Fire remains at approximately 1,500 acres in the latest report from the Forest Service and the incident management team working on the fire. The report was shared with WTIP at noon Tuesday. Property owners from the end of Gunflint Trail to the south end of Loon Lake are still in pre-evacuation status, according to the Forest Service.

Just south of the John Ek fire, the Whelp Fire is a lightning-caused fire located five miles northwest of Sawbill Lake and is an estimated 60 acres. The fire also grew Monday as the result of sustained winds. Aircraft conducted water drops on the fire yesterday.

Mapping the John Ek Fire and Whelp Fires remains challenging at this time due to limited resources and the abundance of wildfire activity across the region and nationwide, according to fire officials who spoke with WTIP Aug. 23.

A public meeting specific to the fires will be held Aug. 25 at 6 p.m. at the Tofte Town Hall.

In Lake County, the Greenwood Fire near Isabella doubled in size from Monday morning into Tuesday and is now an estimated 19,500 acres.

Containment of the fire remains at zero percent, according to the U.S. Forest Service.

Firefighters will return, as conditions allow, to areas impacted by the fire during Monday’s intense surge of fire activity. There are no official reports on the extent of any possible structural damage, including to homes, cabins and other property near the McDougal Lake chain.