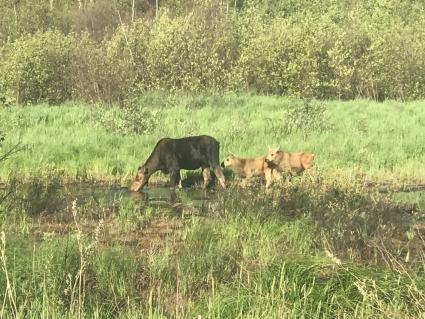 Reports of moose being struck and killed on the Gunflint Trail in late June have local residents and outdoor enthusiasts concerned, particularly about the rate of speed some motorists are traveling on the roadway.

Cook County Sheriff Pat Eliasen told WTIP during a June 28 interview that at least two moose were killed by motorists during the past week. Eliasen said the recent incidents involving moose occurred in the mid-Gunflint Trail area.

The DNR’s 2022 survey estimated the moose population at about 4,700 animals. The survey showed no statistically significant change from the last one conducted in 2020 but is the highest estimate since 2011. Click here to learn more about Minnesota’s moose population.

Regarding the recent incidents, a 40-mph zone that stretches 2.5 miles from near the start of Hungry Jack Road near Trail Center to the far entrance of Rockwood Lodge is an area of concern. Eliasen said this stretch of the Gunflint has traditionally been a problem area in terms of motorists speeding.

During the update, which aired live on WTIP’s Daybreak program, Eliasen reminds motorists about what goes into traveling safely on narrow winding roads like the Gunflint during the upcoming holiday weekend. Eliasen also talks about an uptick in certain local crimes, including violent crime, assaults and domestic violence.

“I don’t know if people are just losing patience with one another and there’s really no more just talking things out anymore, and people are just reacting instead of speaking with each other, I don’t know?” Eliasen said. “But I’ve noticed that it has increased.”

Listen to the full interview with Eliasen in the audio shared below.

Photo on WTIP homepage for this story and the Soundcloud image courtesy of Big Bear Lodge on the Gunflint Trail.