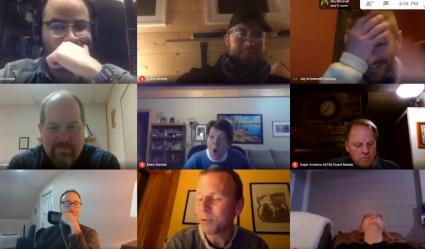 New Grand Marais City Councilor Michael Garry did not make it through the first 90 seconds of his tenure before becoming ensnared in controversy.

While taking the oath of office during the Jan. 13 city council meeting – Garry’s first as an elected member of the council – he made a notable comment about President Donald Trump. During the swearing-in ceremony at the start of the meeting, Garry inserted a line about the president while acknowledging that as a member of the city council he will work to uphold the United States Constitution.

“Unlike my president,” Garry said with regard to upholding the Constitution.

The statement did not go unnoticed.

Visibly agitated by Garry’s comment during the oath of office were fellow councilmembers Kelly Swearingen and Craig Schulte. Swearingen threw her head back immediately after Garry made the statement before turning her screen off during the Zoom meeting. Mayor Jay Arrowsmith-Decoux appeared shocked as well, though he expressed it by laughing somewhat awkwardly. The mayor did not address Garry’s statement about Trump directly during the meeting Wednesday night.

City Administrator Mike Roth spoke to WTIP and said he believes that the swearing-in was valid despite the added statement and said Garry is officially now a city councilor with voting rights. Roth pointed out that City Attorney Chris Hood was a participant in the online meeting and did not raise any objection.

In the meantime, the apology to council members reads:

“I would like to apologize for my inappropriate attempt at humor during my swearing in last night. I do take my position, as you do, very seriously. I am proud to have been elected to serve with such upstanding members of our community. I know we will have a very productive session this year. Thank you.”

This is a developing story. Check back for updates.