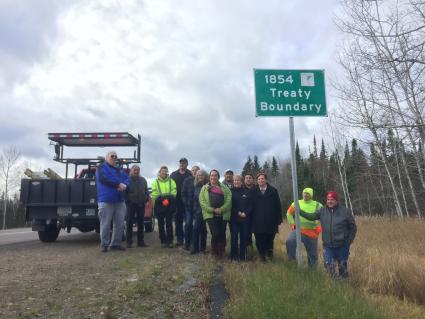 At a gathering hosted by the Grand Portage Band of Lake Superior Chippewa on October 30, the need to work together and to understand treaty rights was mentioned many times. The meeting was an opportunity to speak with legislative representatives, but it was also a time to share exciting news from the county, state, and the Grand Portage Band. At the end of the day, Grand Portage Tribal Chair Bob Deschampe shared the news of new highway signs being installed at the boundaries of the 1854 Ceded Territory.

In his closing remarks at that gathering, Chairman Deschampe encouraged everyone to attend tribal-state training. He said Grand Portage takes its treaty rights very seriously and is doing its part to educate the public on the Treaty of 1854.

A few days later, on Monday, November 1, Deschampe, along with Tribal Council members John Morrin, April McCormick, Bill Meyers, and Marie Spry, was part of the contingent that put up the first sign of 12 to mark the 1854 Treaty boundaries in the State of Minnesota.

They were joined by Minnesota Department of Transportation officials, including Levi Brown, who is the MnDOT Tribal Liaison and MnDOT Commissioner Margaret Anderson Kelliher.

They were also joined by officials from the 1854 Treaty Authority, the inter-tribal natural resources agency. In a news release, MnDOT gave special thanks to 1854 Resource Management Director Darren Vogt for his work. The statement said, “It took 11 years and six months to get these into being.”

Deschampe added that this is something that is long overdue. Deschampe said, “When people enter the 1854 Treaty area they will know where they are and, hopefully, educate themselves about treaties.”