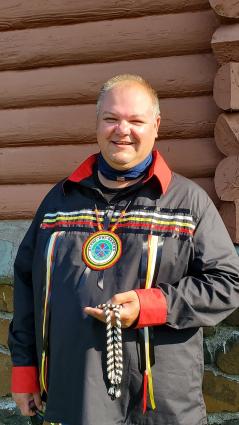 The Grand Portage Band of Lake Superior Chippewa has a new tribal chair. In front of a small assembly of friends, family, and community members Robert “Bobby” Deschampe took the Oath of Office under bright, sunny, skies in the parking lot of the Old Log Community Building.

The Oath of Office was administered by Grand Portage Tribal Judge Tina Deschampe, the daughter of the late Tribal Chair Norman Deschampe.

There were some very meaningful aspects of the short, informal ceremony. Chair Deschampe wore an Objibwe ribbon shirt a gift made by Grand Portage Band Member Mary Rose, who lives in New Mexico. Around his neck was a beaded medallion lovingly crafted by his cousin, Mary Ann Gagnon, a gift from Band Member Agatha Armstrong.

Just before taking the Oath of Office, Robert received another gift from his father, Butch Deschampe–a black and white beaded medallion that Butch wore during his time serving on the tribal council. The medallion image is a powerful thunderbird.

The ceremony was over quickly and Chair Deschampe made a brief statement. He thanked Band Members for voting for him. He assured them that he had learned a lot during his time as Cook County commissioner, representing the Grand Portage area. He recalled the many years that he worked with Norman Deschampe and became a little emotional as he said he had learned a lot from the former Tribal leader. See a portion of his statement here.

There was some visiting in the parking lot, with handshakes, hugs, and socially distanced elbow taps.

Deschampe will start his official duties at the Reservation Tribal Office on Monday, August 24, taking the reins from Tribal Chair Beth Drost.

Another Oath of Office ceremony will be held at the Old Log School parking lot at 5 p.m. on Tuesday, August 25, for Marie Spry, who won the committeeperson seat in the August 18 election. She assumes the position held by Rick Anderson. 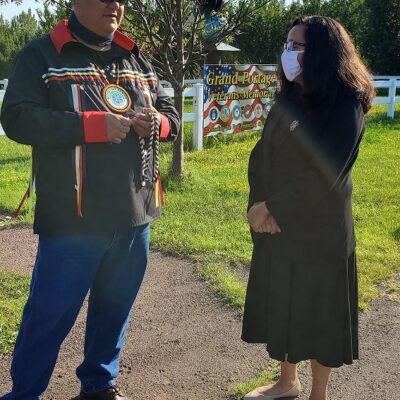 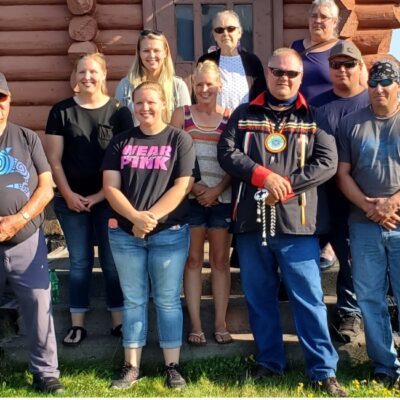 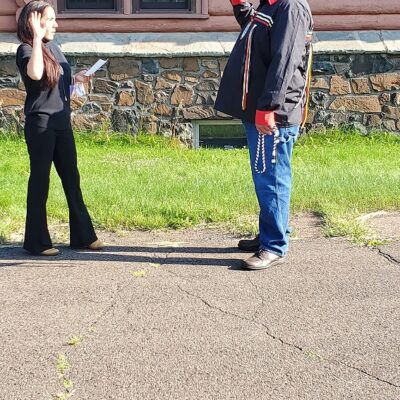 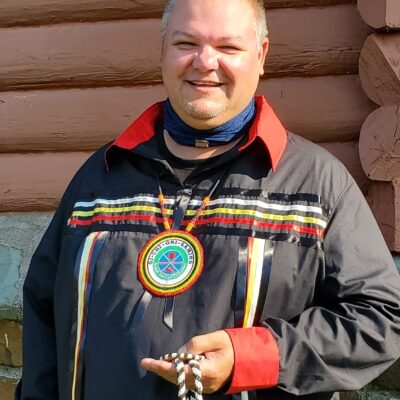