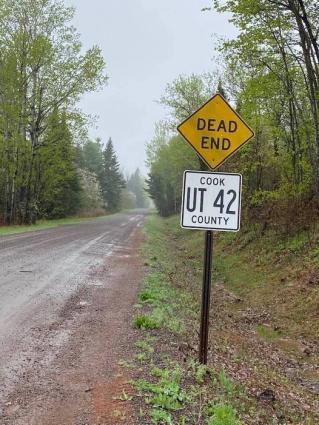 Though change can often be a difficult process for some, new road signs are a good thing for the Cook County Highway Department this year.

Some of the most remote roadways in Cook County will be eligible for more state funding due two words: unorganized territory.

New signage on some of the local roadways drew attention from community members recently. Of particular interest was the ‘UT’ designation before a collection of road numbers. For example, County Road 42 is now designated as ‘UT 42.’

Cook County Highway Engineer Robbie Hass told WTIP May 20 that the county will receive “approximately $40,000 of new money every year for maintenance on these roads. This offsets our levy demand and easily pays for the signs within the first year.”

Hass said the one-time cost for the signs was approximately $3,000.

Perhaps more importantly than access to state funding by designating the roads as being ‘unorganized territory’ thoroughfares, Hass said more funding will be available for bridges on any of these roads.

“This wasn’t something available to us before as we didn’t have any roads designated as such,” Hass said. “I think there will be eight or nine bridges that now qualify for this funding source that would otherwise be levy dependent structures. It’s not to say the cost couldn’t be split somehow between the two sources, but it sure beats being 100 percent levy dependent.”

Hass spoke with WTIP’s Joe Friedrichs about the process of changing the roads to the new designation and the new signage on some of the local roads in Cook County. The audio to their conversation is shared below.