Representatives of North House Folk School came before the Grand Marais Planning Commission on March 23 with a request for a shoreline setback to construct a new building—on the Dockside Fish Market property where a steel building and a historic fish house now sit. What will happen to those buildings depends partially on the planning commission’s decision on the shoreline setback request. No decision was made in March, but the setback will be considered again at the city planning commission meeting on April 6.

The discussion at the March planning meeting focused almost entirely on the need for a shoreline setback. But Planning Commission Member Stacy Hawkins said one of her primary questions was related to the historic Scott fish house. She asked, “Where are these two buildings going?”

North House Director Greg Wright said North House understands the historic significance of the old fish house and explained that the folk school is working with the Minnesota Historical Society, Cook County Historical Society, and the architectural firm LHB on a historical structures report. They are working on what would need to be done to move the building. Until that report is complete, it is not known where the building would be located.

LHB representative Bruce Cornwall noted that this can be a parallel process. North House can pursue relocating the old fish house in an appropriate manner while planning for the new Harborside Classroom. And, he noted that even if the footprint of the proposed building was changed or the project dropped, the historic building could still be moved. 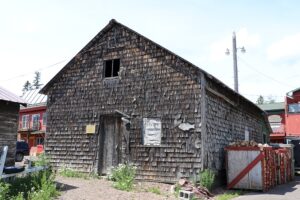 Hawkins reiterated her concern for the historic Scott fish house. She said she had walked the property and saw the historic plaque on the building. She also walked the shoreline to the new boat launch area and looked back, trying to imagine what a large building would look like on the shoreline. She said, “So I didn’t know the process for making sure we’re not destroying a historical structure.”

Wright noted that it would benefit the public to have the fish house moved, and restored and to have the appropriate interpretation of the building provided in a location with better visibility. However, that location has not yet been determined.

After that brief discussion of the future of the Scott fish house, there was a lengthy conversation about the folk school’s request to construct a 40’x72-foot building on that spot with the footprint of the building well into the lakeshore setback. All of the planning commission members present—Chair Michael Gary, Stacy Hawkins, Anton Moody, and Ben Peters—expressed concern about how close the building would be located to the water.

Wright and North House Folk School Facilities Director Matt Nesheim explained that one of the primary reason for the building being placed so close to the shoreline was to give delivery trucks that serve the four businesses in the area room to drive in and turn around. North House shared letters of support for their setback request from McMillan Landscaping, Angry Trout, and North Shore Waste, all who expressed support for anything that could be done to make snow removal and deliveries easier. Wright also answered a question about access for North Superior Fisheries to the basement of the Dockside building where they process fish. Wright said access for them has been factored in the plan.

Planning Commission members noted that creating this space for truck service does not necessarily meet the city’s criteria for variances. To grant a variance, the city must agree that the plight of the landowner is due to circumstances unique to the property not created by the landowner.

Peters said, “I think we all do take setback requirements very seriously. We ask for, with our homeowners or other businesses, to follow the rules that have been set forth.”

Peters said the only way to have a setback approved is to show a real hardship. He questioned whether that was the case here, noting, “…You can correct me if I’m wrong, the only real hardship is the size and the scope of the build relational to the size of the lot.”

Only one public comment was received, from Don Boostrom, a former resident and frequent visitor. City Communications Director Patrick Knight read the comment, which urged the commission to not allow the setback writing that he is sad to see the shoreline “be degraded one variance at a time.” Boostrom asked the planning commission to preserve the quaint atmosphere of the Grand Marais harbor and questioned what this new building would do to the Lake Superior views for surrounding properties. 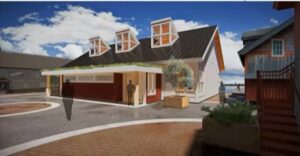 That led to a discussion of what the new building if approved and built, would look like. Commission Member Anton Moody, who was recently appointed to the planning commission, said he doesn’t want the planning commission to act as a design review committee. However, he asked if North House could share more details about the building.

Moody asked about the overall height of the building. He said a 3,200-foot building is large and hard to imagine on the site. He asked if LHB could provide some architectural drawings of some kind. Hawkins agreed, adding that she would like to see what the building would look like from the waterfront.

LHB’s Cornwall shared some drawings with the commission, such as the one shared above. One, was a colored artistic rendering of the building as it would look from the deck at The Fisherman’s Daughter. The other was a less complete sketch of what the building would look like from the water. Cornwall pointed out several aspects of the proposed building that he said would improve the area, such as permeable pavers and a settling tank instead of a gravel parking area. He said the roofs would match the existing buildings with an 8/12 pitch. The small roof over the entrance to the building would have a green vegetated roof. The building would have board and batten siding, similar to the other North House buildings.

And he reiterated that the plan would make it easier for truck deliveries and trash collection.

Wright shared his thoughts on the proposed new building. He said, “The aesthetic is much like the red or blue building. Both of those we see as kind of ideal classrooms for the school, big open space, very natural connection to the lake in the sense of big windows. It also turns out that those windows serve visitors to the Grand Marais harbor. And to the community pretty well too, in the sense of people look in. They’re curious about what’s happening.

“And by putting the big windows on the corners there, you actually in a sense, make the corners of the building permeable. Visually, in a number of places you can see through the building to the lake,” said Wright.

The commission thanked North House and LHB for that information and expressed appreciation for the thoughtful planning for things such as stormwater runoff.

However, Moody said he would like to learn more about the process of designing the building on this piece of property. He said creating a better turnaround for trucks does not seem to meet the burden that must be met for a variance, which is that the proposal is the most reasonable use of the land.

Moody said he would like to see what other concepts or layouts were considered and why didn’t they work? He said, “Because then it’s like, oh, you tried these different things and this doesn’t work. So it is actually an undue burden on you to not be able to use this space.”

Commissioners ultimately tabled the request and asked North House representatives to come back with more information on the process that was undertaken to develop the building plan, to show that this is the only way to make this work, which would fulfill the criteria for a variance.

The North House Folk School shoreline setback request is on the Wednesday, April 6, Grand Marais Planning Commission meeting. The meeting begins at 5:25 p.m. in the Grand Marais City Council chambers. The meeting can also be viewed online on the city’s YouTube channel.

Yet another upcoming detail of the master plan is the removal of the little Yellow House that serves as a welcome desk and gift shop, which North House Folk School also owns. The structure has foundation issues and is not really set up for the entry to the campus. Plans have begun to remove and replace the Yellow House with something more suitable and welcoming, Wright told WTIP earlier this year.

Other changes and additions to the North House Folk School campus since 1997 include the purchase of the former Superior National Forest headquarters building in May 2016, across Highway 61 from the main North House campus. The building provides office and classroom space. North House also rents a section of the building to a commercial enterprise, North Shore Title.

In October 2021, North House Folk School purchased a parcel of land across from its main campus, west of the former Forest Service building. Part of the lot is undeveloped and the upper portion was cleared when an old house was removed. Any development of that property will be a challenge for the folk school, as there are concerns about Anishinaabe burial sites on the land. In a previous WTIP interview, Wright noted that North House is very cognizant of that and said the folk school had consulted with the Grand Portage Band of Lake Superior Chippewa before the land purchase. The folk school has also reached out to the Minnesota State Archeologist’s Office for assistance before any construction begins.