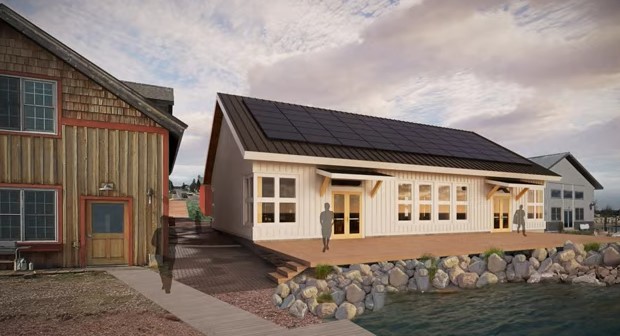 The North House Folk School was back at the Grand Marais Planning Commission meeting on Wednesday, April 6, bringing further information on its request for a shoreline setback variance to construct a new building on the Dockside Fish Market property, which North house owns. If the variance was approved, it would allow North House to construct a 40- by 72-foot, 3,500 square foot building, with the footprint well into the city’s required 40-foot shoreline setback. The request was denied, but the planning commission did not completely shut down the folk school’s vision for the property. After several hours of public comment and commissioner questions, the commission asked North House to consider the feedback and reapply for a modified variance request in the future.

Although the variance was denied, such requests are still brought forward to the Grand Marais City Council for final approval or denial. That would have meant more discussion at the April 13 city council meeting. On April 8, WTIP asked City Administrator Mike Roth if the council has the authority to approve a variance that had been denied by the planning commission. Roth said yes, although it does not happen often. However, Roth said North House has withdrawn its request for a shoreline variance, so it will not be on the agenda on April 13. 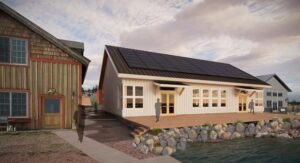 This screenshot of the LHB drawing at the Grand Marais Planning Commission meeting offers a view from the water of the proposed new building at North House Folk School. At this time, it appears the building will not become a reality.

The April planning meeting drew more interest than an earlier meeting on March 23. About 13 people were in the audience at Grand Marais City Hall and another 23 people were watching the meeting online. The planning commission first heard an update from Folk School Director Greg Wright and the architect working with North House on the new building project, Bruce Cornwall of LHB.

As requested at the previous planning commission meeting, they returned with information on the design process undertaken for the current building proposal. Wright first gave a brief history of the growth of North House Folk School since 1997. He outlined the changes on the waterfront since North House took over the former forestry buildings in a lease with the City of Grand Marais.

He referenced a variance granted previously to the folk school allowing it to rebuild after the former Tommy Eckel fish house was destroyed by a runaway truck. He shared a photo of that building, noting that it was built a little closer to the water.

Wright provided data on how the number of students at the school has grown over the years, and the varied youth and community programs the folk school offers. He stressed that the folk school needs more space to accommodate those activities. And, Wright said, the Dockside Fish Market property is key to that growth.

Wright talked about the early days of the folk school when it operated only in the buildings now known as the blue building and red building. He said there were two classrooms in each building for a total of four classes to start. After the Tommy Eckel fish house was destroyed, two classrooms were created in the new building. Later, with the purchase of what is called the green building, across the highway from the folk school campus, two more classes were added. However, the current classrooms are very small and cannot accommodate the current larger class sizes.

Cornwall shared drawings detailing North House’s new building plan which would add two classrooms of 1,200 feet. He explained that this space was needed to safely conduct classes using construction materials and tools.  As designed the building would also provide a community space that could seat up to 150 people at tables for events, something that North House believes the community needs.

Wright noted that North House needs classroom space to offer classes to fund its programming, but added that the school also wants to be a good steward of the waterfront property.

“So you know the issues we’re trying to address right now. You know, the site is a big gravel parking lot with vehicles right next to Lake Superior. Water washes off in big storms. There’s no stormwater management.

He said the other things North House wants to accomplish with the project are to provide public access to the waterfront, accommodate truck traffic for the businesses in the area, and find a new home for the historic Scott fish house. He said doing so would put it where it could be cared for and be highly visible to the community.

At the last planning commission meeting in March, commission members asked North House to show the process they followed to determine that the proposed building had to cross into the 40-foot shoreline setback to work. They asked for affirmation that the proposed building was the only way that the folk school’s needs could be met, thereby fulfilling the city variance requirement that states “the plight of the landowner is due to circumstances unique to the property not created by the landowner.”

Cornwall reviewed the changes to the North House campus with the recent Minnesota Department of Transportation reconstruction project, pointing out that the folk school went from four driveways to two, which made the site more pedestrian-friendly, but presented challenges for delivery trucks.

He said for that reason, the service area behind Dockside Fish Market needed a large open space for trucks to enter and turn. The architect presented four sketches of locations considered for the building each including information on how trucks would be able to maneuver in the area with the different building orientations on the parcel. He said he believes the layout in the variance request is the best option.

A number of citizens asked North House to preserve the commercial fishing operation, North Superior Fisheries, at that site.

Eric Brisson of North Superior Fisheries asked questions about parking for the business owners and Wright said North House would work to address that topic.

Later in the meeting, Adrianna Brisson thank North House for working with the fishery but expressed concern about the future partnership. She listed her concerns, such as the removal of the structure in which fishing gear is now stored. Brisson said they’ve been told another structure could be built on the dock, but they have nothing in writing on that. She also expressed concern about the apparent removal of a boat launch that North Superior Fisheries sometimes uses to pull their boat up for repairs.

Brisson also said the proposed configuration means that a large semi cannot go down to the dock where herring is loaded in the fall. She said that will create a hardship as fish will have to be hauled up to the highway by forklift. It’s not only a hardship for the fisheries, she said, but a potential for conflict with North House students.

She explained that during the fall herring season, the fishery hauls 30 to 40 10-pound boxes of fish off the dock. “In order to haul that much fish out of the lake, you have to use a forklift. And we are told that there is enough room to get that forklift through between the two buildings. But, you know, fishing is a messy deal. There’s lots of guts.  There are seagulls and you know, there’s going to be this great big beautiful building and we have to sneak around with this dirty old forklift with the smell of fish coming out and dripping all over your brand new concrete…People are really going to get a show when they see us.”

Mostly, Brisson said she wants to see the long tradition of commercial fishing continue, and that a way is found for the fishery to coexist with the folk school if this variance is granted. She said commercial fishing is what North Superior Fisheries does for the community. It is something they are passionate about, she said and they worry about their business. “Like others have said, maybe we’ll get pushed out. We hope that doesn’t happen. But you know, we weren’t on the maps, so you can’t help but have that kind of fear.”

Wright has stated numerous times that the folk school believes having the fishermen on the dock and campus is part of the mission. North House Folk School Board Member Mike Prom spoke, echoing that sentiment. Prom said that preserving the commercial fishing operation has been part of all the meetings he had attended, joking “all 75 of them.”

He added, “We do not want to be a deterrent. We want the fishing, it is important to the culture of North House. And so it’s been in the forefront all the way along.”

Another community member, fishing guide Gary Radloff, who described himself as a “marina rat” who grew up in the marina area next to the folk school, said the new building would not fit the variance requirement that a variance “fit with the character of the area.”

Radloff said he already sees that the folk school doesn’t fit the character of the area when watching people walk up to the school campus. He said unless it is someone familiar with the school, he sees people walk along the waterfront to the school and they stop and look, then turn up the bridge path to the highway. He said if the building is constructed with a deck over the water, people will not think it is a community space as it looks like a business. He said, “It’s just not community-friendly,” Radloff said.

A neighboring property owner, Barb LaVigne of the Angry Trout, noted that North House could have done many things with this property, and she commended them for their stewardship of the land and said she supported the proposal. She pointed out that the property is zoned C-1. Someone could have purchased the parcel and built a three-story condo there, she said, adding that in that case the fishing operation would definitely be gone. She said North House is committed to keeping the fishermen there.

After nearly an hour of public conversation, planning commission members themselves spent considerable time sharing their concerns and asking questions until finally reaching a consensus that North House needed to reconfigure its plans to construct a building that does not encroach so far into the 40-foot lakeshore setback. They suggested perhaps downsizing the building as one means to do that.

The planning commission members also asked the folk school to return with better justification to show that the proposed building meets another variance criteria, which is fitting with the character of the area.

The planning commission members—City Councilor Anton Moody, County Commissioner Stacy Hawkins, Michael Gary and Ben Peters—voted unanimously to deny the variance request. However, they did not completely shut down the folk school’s vision for the property. The commission asked North House to consider their comments, as well as those from the public and reapply for a modified variance request in the future.