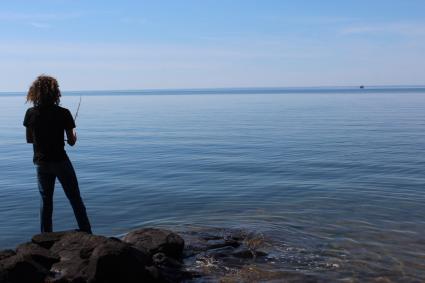 With abundant options for outdoor recreation on the North Shore, WTIP and other media outlets across the state noted on many occasions about how many people are flocking to the area in the summer of 2020 to go hiking, biking, canoeing or other similar activities.

With the COVID-19 pandemic cancelling many large-scale events and indoor activities, the great outdoors was a logical destination, one even encouraged by health officials across the state.

In the Boundary Waters Canoe Area Wilderness and surrounding area this summer, outfitters reported to WTIP that many novice, or first-time paddlers were visiting the area. Reports of non-compliance with BWCA rules and regulations soon followed, as did angst from the paddling community about how the lands and waters in the federal wilderness were being treated this summer.

Another location and group of people recreating on the North Shore are now being called out for harmful and in some instances illegal activity: anglers on Lake Superior.

Minnesota Department of Natural Resources Conversation Officer Kylan Hill reported in mid-August that there was “an excellent bite on Lake Superior with nice fish of various species being seen in live wells.” However, Hill noted that anglers need to “be sure to brush up on fish identification before you head out, as some anglers kept the incorrect species of fish.”

Cory Goldsworthy is the Lake Superior area fisheries supervisor for the Minnesota DNR. He told WTIP’s Joe Friedrichs that misidentification of trout and salmon has traditionally been an issue to some degree on Lake Superior and its many tributary rivers and creeks. However, Goldsworthy said, as increased numbers of novice anglers take to the waters of the big lake this summer, reports are coming in that steelhead and other species are being caught and kept by anglers. It is illegal to keep all wild steelhead in Minnesota waters, both in Lake Superior and its tributaries.

Goldsworthy spoke in late August with Friedrichs on this topic and more angling news from Lake Superior. The audio to their conversation is shared below.