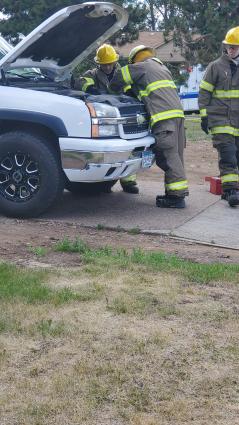 A pick-up truck caught fire in a Grand Marais yard on Friday afternoon, but fortunately it was spotted by a passing sheriff deputy, who alerted the family and called for emergency responders.

A page went out at 3:46 p.m. for the Grand Marais Fire Department and North Shore Health to respond to 1920 West 5th Street, a residence across from the Cook County YMCA. The fire was quickly put out with fire extinguishers, but for a few minutes, black smoke billowed from the engine of the Chevy pick-up belonging to Lance Anderson.

Deputies directed traffic past the scene on busy 5th Street until it was confirmed that the fire was out. All responders were clear of the scene by 4 p.m.

The cause of the fire is not known. There were no injuries.