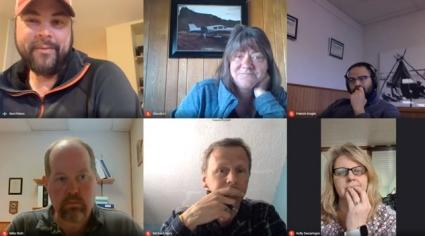 The Grand Marais City Council meets on Wednesday, June 9 at 6:30 p.m. The meeting will take place partially in the City Council Chambers with some participants online. Visit the city’s website for information on observing the meeting. Comments may be emailed to city councilors ahead of the meeting to communications@grandmarais.city

There are three planning commission matters on the council agenda, two related to home businesses on Broadway Avenue and one regarding a lot line setback variance for a carport.

The first request came from Katherine McClure who is seeking a conditional use permit to operate a part-time chiropractic office from her house. Noting that there was very little traffic and almost no signage for the business, the planning commission unanimously recommended approval as a home-based business in the city’s residential zone.

The second request is from Larry Marxen who has been operating a small engine repair shop at his corner lot above Johnson’s Foods for many years. The planning commission received six public comments in support and two in opposition. Those in opposition expressed concern about business “creep” into the residential zone. The was also a statement that there are parking and noise issues. One commenter said that Marxen’s pickup, which has his business name and services painted on it, is commercial advertising in violation of the city residential zone ordinance.

An adjacent neighbor said they are trying to sell their home and said, “Buyers need to know if they are buying into the R-1 zone, mixed-use zone, or commercial zone, not the city’s ‘two-sets of rules zone…’”

One supporting comment added that they would like to see a requirement that hours of operation to end at 5 p.m.

There was also a petition of support for Marxen’s business, signed by 56 people, however, it was noted that it is unknown how many signers live in the city.

The planning commission spent a lot of time discussing this request but eventually noted that small engine repair is allowed as a conditional use in the residential zone. However, it was also noted that welding is not an allowed use. The planning commission approved the conditional use permit contingent on the condition that no on-street parking be used for project work; that hours of operation be from 9 a.m. to 5 p.m. and no welding for hire be done onsite.

A final planning commission matter was the request for a variance from the 25-foot setback for a timber frame carport. Randall Eastland sought authorization to construct the carport eight-feet from his lot line, where he currently parks his vehicle.

The planning commission had a significant discussion of this request as well, noting how “tight” it would be on the lot and how it did not seem to “fit” in the neighborhood as other homes were set back further on their lots.

The commission also noted that the recent ordinance revision affirmed the city’s desire to have setbacks at 25-feet. Planning Commissioner Member Ben Peters said the reason the city has these setbacks is so carports and garages are not right up against the road. The variance request was denied unanimously.

These recommendations will be considered during the city’s next meeting, which is Wednesday, June 9 at 6:30 p.m.