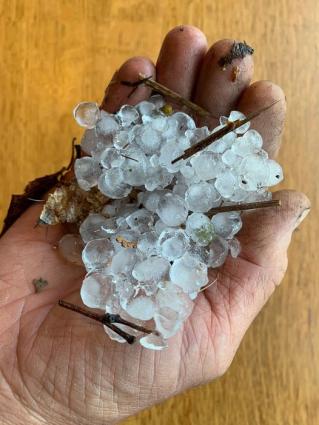 A strong storm system moved through select pockets of Cook County Wednesday, June 30, knocking out power to most local residents and damaging at least one local business in the process.

The Good Nature Farm, located in the Casper’s Hill area near the east side of County Road 14, saw some of its crops damaged during the afternoon weather event. Nick Wharton, who co-owns and operates the family business with his wife, Kristin, said the storm came on quickly and otherwise unexpectedly on the final day of June. Regarding damage to the 2021 crop, Wharton said leafy greens such as lettuce and kale were damaged by the storm, as were vines of some vegetable plants, including cucumbers.

Wharton spoke with WTIP’s Joe Friedrichs about the hail storm and how it impacted the Good Nature Farm. The audio below is their conversation from July 1.

Friedrichs also spoke with Dan Johnson, the operations manager at Arrowhead Electric Cooperative in Cook County, about the storm and power outage. A lightning strike at the Maple Hill substation was the primary reason for the widespread power outage June 30, Johnson said. The audio to their conversation is shared below.