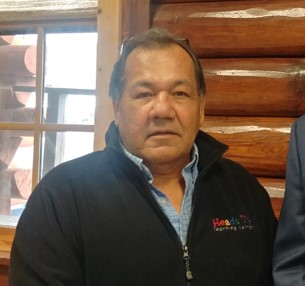 Norman Deschampe, the late chair of the Grand Portage Band of Lake Superior Chippewa, passed away on February 9, 2019 – just 17 days before his 66th birthday.

Deschampe had an impact far beyond the close-knit community of Grand Portage, as far as St. Paul and Washington D.C., and as close as the neighboring city of Grand Marais. In recognition of his long service on the Grand Portage Tribal Council and his dedication to the community, Grand Portage and Grand Marais designated February 26 – Norman’s birthday – as Norman Deschampe Day.

Governor Tim Walz also issued a proclamation on February 26, 2019, in recognition of Deschampe’s dedication to improving the lives of the people of Grand Portage through programs supporting education, health, and economic development.

Deschampe served in the tribal chairman position for about 28 years. He also served on the executive committee of the Minnesota Chippewa Tribe, whose members are of the Grand Portage, Bois Forte, Fond Du Lac, Leech Lake, Mille Lacs, and White Earth bands.

Deschampe was an early supporter and friend of WTIP Community Radio. He was open to sharing information on tribal sovereignty, on the benefits of Indian gaming, the band’s relationship with local schools and the community, and more.

In the days leading to Norman Deschampe Day, WTIP has been reflecting on Deschampe’s leadership. We visited the archive to listen once again to an in-depth conversation Helping to put Indian Country into perspective between WTIP’s retired Senior Editor Jay Andersen and Chair Deschampe.

In response to Jay Andersen’s question about the status of race relations at the time of the interview, on March 18, 2011, Deschampe had this to say:

“In general, I guess I think we’re getting better. Just because the communication nowadays is a lot better than it was 20 years ago.   I think people just interact more and we’re a lot more mobile. Communities, really even Grand Portage, is not near as isolated as it was 30 years ago.   So, but in general, I think it’s getting better. I think we do have some areas we could work on. One of them is a basic understanding is…we’re different. Indian people in general are very positive people. We’re not declaring war on anybody, we just really have an interest in some things that we want to protect, just like anybody else.

… I think education has a lot to do with that. We’ve come a long way as far as awareness and educating people what we’re all about. We went through this whole treaty process in northeastern Minnesota without the racism and all the problems that happened in Wisconsin and I think a large part of that is this is Indian Country and we respect each other.

And…I think we’re getting there… I really do.”

You can find the entire Community Conversation below.