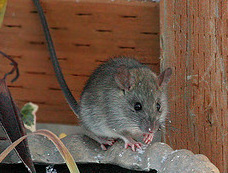 Plant the tune “Rags to Riches” in your mind… Now replace ‘rags’ with ‘bears’ and ‘riches’ with ‘rodents.’

On the North Shore of Lake Superior this fall, we’ve literally gone from nuisance bears to pesky mice.

Following dozens of incidents involving bears and humans in recent weeks, reports reached the WTIP news desk in late September about a ‘surge’ of mice, moles and other small mammals causing trouble from Lake Superior to the end of the Gunflint Trail. As one WTIP listener put it: The ‘trouble’ is that there are lots and lots of the aforementioned critters clawing their way into households and businesses throughout the region.

Nancy Hansen is the Minnesota Department of Natural Resources wildlife manager based in Two Harbors. She told WTIP’s Joe Friedrichs that populations of small mammals numbers “can climb at times because they are able to have multiple litters in a season and because they can react quickly that way to good food or good weather conditions.”

Reports of nuisance mice and small mammals are reaching beyond the news desk of the community radio station in Grand Marais. Bill Dalin is the owner of North Shore Superior Pest Management based in Grand Marais. Dalin told WTIP that he’s been working in pest control management for about a decade and has never seen the population of mice higher than it is this fall.

Theories abound for why the rodent and small mammal population is exploding on the North Shore at this time. Listen to the interviews below to learn from Hansen and Dalin about why they think there are more problem mice this fall than in previous years and what homeowners and others can do about the situation.