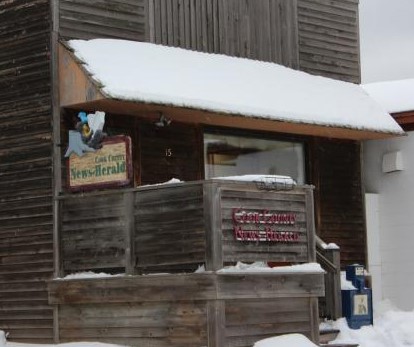 The local newspaper in Grand Marais is not so local anymore.

As originally reported by WTIP, the Cook-County News Herald sold in late November to a company based in New Jersey. The name of the company that bought the local newspaper, according to Minnesota Department of Revenue records, is Fifteen Grand LLC.

The entity Fifteen Grand LLC, based in Morris Plains, NJ, appears to have little to no history of doing business in Minnesota or anywhere in the United States. An extensive online search for information about the company yielded no background or details about what the business does or its history. According to the Minnesota Secretary of State’s office, Fifteen Grand LLC registered as a business in Minnesota Nov. 18.

A front page news story in the Dec. 5 edition of the News-Herald states that the newspaper was sold to a company called CherryRoad Technologies. There is no mention of Fifteen Grand LLC in the News-Herald’s report about who bought the local paper.

An email sent Dec. 2 to WTIP from Laurie Schlegel in the Minnesota Secretary of State’s office said 15 Grand LLC was originated in a filing by Amy Ramsburg, a resident of Boca Raton, Florida, and Jeremy Gulban, the man listed in the News-Herald article as the next publisher of the newspaper.

WTIP reached out to CherryRoad Technologies and Gulban multiple times during the first week of December for comment and to get more information about his plans for the Cook County newspaper. Multiple phone messages, emails and social media messages were not responded to.

Hal and Deidre Kettunen, the now former owners of the local paper, are listed on the Department of Revenue website regarding the sale of the News-Herald. The newspaper sold for $192,000, according to state records.

An extensive search of what CherryRoad Technologies does yields no records of any involvement with media, publishing or journalism. The company, according to the News-Herald, is part of the information technology service industry. “(CherryRoad) provides system integration, consulting, hosting, and cloud services to healthcare, entertainment, higher education, service markets, and government agencies,” according to the News-Herald.

In his Dec. 5 article about the sale of the newspaper where he is employed, Editor Brian Larsen states that CherryRoad Technologies “was founded on June 20, 2006.”

However, the homepage for CherryRoad Technologies states that “since 1983, some of the largest public sector entities in the U.S. have trusted their mission-critical workloads to CherryRoad.”

There are many questions that remain regarding what will become of the News-Herald, including why CherryRoad Technologies, a New Jersey based company with no apparent ties to Cook County or the North Shore, would buy the local newspaper. Moving forward, Larsen is scheduled to remain on as editor, according to the News-Herald. WTIP reached out to former Cook County commissioner and current News-Herald columnist Garry Gamble to ask if he will continue to write his weekly segment that covers topics ranging from local politics to his interpretation on various readings in the Bible.