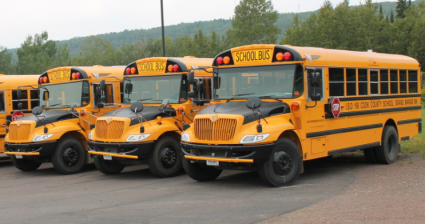 Thursday, October 22, was a very busy day for School District 166. The district re-opened its doors to students from kindergarten through third grade in a hybrid learning model and in the evening held a school board meeting.

The meeting was one of the shortest held in months and included a report from Megan Myers, principal, and acting superintendent, about the “pivot” that took place earlier that day. Myers said things went remarkably well. She said parents dropped off students appropriately; students had their lunches and wore their masks and respected the social distancing guidelines. She said it was different, but “it felt like school.”

Board member Carrie Jansen said credit for the smooth first day goes in part to the Zoom meeting for parents conducted by Principal Myers. She said walking participants through what returning to school would look like was very helpful. Jensen said the school board has talked about improving communications and this is a great example of how that could happen. She suggested that meetings like these continue, even after the pandemic.

Myers also reported on the devices being used by students in school and during distance learning days. Every student has their own device. She noted there have been some broken devices and said the school’s decision to obtain devices under a lease program was wise. She said if a device breaks, it is replaced at no charge to families, at least for the first incident.

Board Member Rena Rogers expressed concern that having to pay to replace a device could be a hardship for a family. Myers agreed and assured the board that the school would work with families who may find this a hardship.

The board reviewed a draft resolution that gives the superintendent and the school’s Incident Command Team the authority to make changes to the school model (in person, hybrid, or distance) without having to call a special school board meeting. This was discussed and a consensus was reached on this at the last school board meeting on October 13, but the resolution makes that decision official.

The board noted the latest information on un-enrollments. As of October 21, there have been 61 withdrawals. Some new students came into the district, so overall enrollment is down 51 students from 431 in September 2019 to the current number of 380.

Board Member Jensen asked Myers if she knows what choices the students who left the district had made. Myers said 10 families choose an online school option, 21 were homeschooling, and 22 children went to area charter schools.