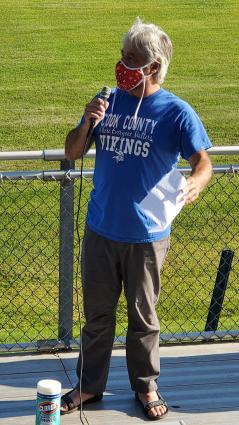 School board struggles with decision on return-to-school

After an hour of emotional public comment and nearly three hours of discussion and debate, the School District 166 school board ended its August 6 special meeting with a tentative decision to proceed with a hybrid return to school, combining in-person and distance learning. The board asked for more information before making a final determination.

The meeting, held on the bleachers at Lyle Anderson Field at Cook County High School, started with public comment. About 50 people spread out across the bleachers or stood on the grass to listen as 20 people stepped forward to speak into the microphone which was wiped down between speakers.

Most speakers acknowledged what a challenging situation the school board is in before pleading their case. Governor Tim Walz’s “Minnesota Safe Learning” plan would allow Cook County schools to open doors for in-person learning, based on the county’s current number of COVID-19 cases. It also allows a hybrid option, with a combination of in-person and distance learning. However, the state guidelines also mandate distance learning should numbers increase dramatically.

The teachers who spoke prefaced their comments by saying that they want to be in school. They want to be on the campus, face-to-face with their students. However, they also said they were very concerned about the spread of COVID-19 and the possibility of bringing the virus home to their families.

Second-grade teacher Amanda Hand said teachers are advocating for distance learning as the best of their least-favorite choices. Students need consistency, she said, and trying to return to in-person learning would not provide that. She noted that every sniffle or sore throat would mean COVID-19 testing and an absence from school for quarantine for students—and teachers.

Hand also said in-school learning would look quite different, noting that teachers will be asking students to sit still all day, with no singing, and regimented bathroom breaks. And, regarding the hybrid option, Hand said that is asking a lot of teachers, to conduct two entirely different types of teaching.

English teacher Michael McHugh said he too felt that starting with distance learning would be best, but said he hoped that a way could be found to sometimes allow a child to meet with his or her teacher in person, to come to school. He said sometimes that is needed.

Maria Burnett, Grand Portage Education Director, reminded the school board that the indigenous community has been especially hard hit by the coronavirus. She said parents in Grand Portage are unlikely to send their students to school in-person.

Several parents commented that the school should follow the plan put forth by the governor’s education and health team, which would allow in-person classrooms.
Some noted that students are already out and about in the community, possibly bringing the virus home to immunocompromised family members. One parent, Plamen Dimitrov noted that many young students are attending daycare already and many older students are working at area businesses, exposed to thousands of people every day.

Chris LaVigne, manager of the Grand Marais Liquor Store, said the store had been declared an essential business and a plan was put in place. He said that is what needs to be done at the school. He said it needs to be done, because if the school year starts with distance learning, it will end up being that way for the whole year.

Jim Wallner said he has confidence in School Maintenance Supervisor Tom Nelson and his cleaning crew and their efforts to keep the school as clean as possible. He pointed to another facility used by children in the community—the YMCA. He said if the Y can be open, school should be as well.

Maria Conlin, who operates a home daycare, said she has been open throughout the pandemic, caring for 12 children, sometimes for 10 hours a day. She said if someone is sick; they stay home. Visitors wear masks and she follows the special cleaning procedures recommended by health officials. She noted that the school has an entire cleaning staff and asserted, “If I can do it, you can too.”

Many speakers talked about the need for social interaction for their children. Dale Bockovich, a former coach and current supervisor of in-school detention, said he is in the target demographic for someone to fall ill with COVID-19, but said he would go back tomorrow. He said the school needs to be open and told teachers, “the kids need you.”

A number of parents spoke about their dissatisfaction with distance learning at the end of the last school year. Parents said their children needed more interaction. They said if the school district’s decision is distance learning, the system needs to be improved to help struggling students.

After an hour of listening, School Board Chair Dan Shirley cut off public comments at 6:30 p.m. and the school board members began asking their own questions about the Safe Learning Plan and its implications for Cook County. They reviewed a Cook County-specific proposal put together by school staff.

Principal Megan Meyers said the plan, which proposes starting school in person, was crafted from meetings with teachers, food service workers, bus drivers, maintenance and with Public Health Supervisor Grace Grinager. She said the plan was not completely done, noting that there are many small details to be worked out, such as “How do we wash Legos?” and “How do we move kids through the lunch line?”

Meyers said a survey went out to School District 166 families, asking which of the three scenarios they preferred. She said 200 responses had been received and so far 78% of the families said they support in-person learning starting in the fall.

She added that she feels relationships between teachers and students are the number one factor in learning. She said without at least a start with in-school learning, students—especially kindergarteners and those making the transition to middle school—won’t get to know their teachers.

The board asked many questions about the different scenarios, with Board Member Sissy Lunde noting that with in-person classes, the day ends at 2 pm., earlier than in the past. Meyers said that is so teachers have time to work with the students who elect to do distance learning. Lunde said that needs to be made clear to parents, as that may impact their desire to support the in-person option.

The occupancy of classrooms, cleaning procedures, COVID-19 testing and turnaround time for results, and more were discussed. When the board appeared frustrated that there were not more specific details, Assistant Principal Mitch Dorr said the difficult part of planning is that the school is dealing with so many hypotheticals. He said the school needs direction from the board to finalize planning on things such as how many substitute teachers are needed; how many bus drivers; and more.

Superintendent Bill Crandall said the planning team is preparing for all three scenarios, anticipating that at some point there may be an outbreak that would mean distance learning. However, he told the school board that the planners would like some direction on how they should proceed for the start of school.

Board Member Lunde also stressed that families need to know what the start of school is going to look like so they can plan. She said there is no way for the school staff to have all the answers now, but she said the board needs to set a clear direction for the planning team and the community.

Board Chair Shirley said there is very little that can be controlled during this global pandemic, but said he feels distance learning is the school’s best means of avoiding a high-contagion environment. He said one of the reasons Cook County has been successful in preventing the spread of COVID-19 is because there are few congregate settings. School is one of those, he stressed.

Board Member Rena Rogers noted that the Cook County Education Association, the teachers’ union, asked the school board to start the year with distance learning. She said she was concerned about the division between school administration and the teachers. The board asked CCEA President Chad Benesh to speak.

Benesh said there are just too many unknowns for teachers to be comfortable. Benesh acknowledged that last year’s distance learning program was not effective, but said the teachers are working to put together a distance learning plan that will work from day one, with more options to reach out to students who may be struggling.

There was more discussion and as the skies darkened over the football field, Sissy Lunde moved adopt the plan that calls for in-person school for all students. There was no second, so the motion failed.

Superintendent Crandall asked the board how it wished to proceed. Board Chair Shirley suggested starting school with distance learning for the first quarter, and reevaluating after that. He made a motion to that effect, but that motion also failed.

Lunde and Principal Meyers both said they believed in-school are best for the students in many ways, including socially and emotionally. Board Member Deb White agreed, but reminded her colleagues that this is a virus that kills or has long-term medical implications.

Superintendent Crandall asked once again for some direction for school staff. Although board member Lunde pushed for a motion to proceed, other board members agreed more details were needed before a decision could be made.

In whatever plan is approved by the school board, an incident management team is needed to deal with the logistics—for planning and implementing back-to-school and for dealing with a possible outbreak. The team needs a school board representative and Carrie Jansen volunteered to take on that role.

Discussion followed and board members appeared to be favoring a hybrid start to the school year. White made a motion to direct the Incident Management Team to more fully develop the hybrid plan for the start of the year and bring that back to the school board’s consideration. That motion passed. The meeting adjourned just after 9:00 p.m.

A special school board meeting was set for Thursday, August 13 at 5:30 p.m. to discuss further. 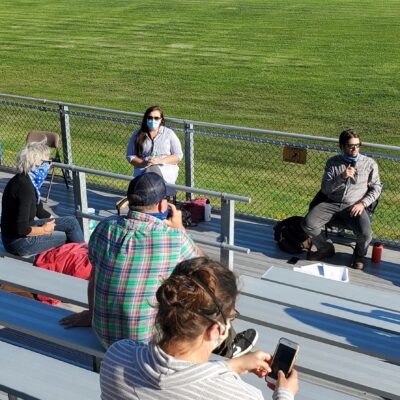 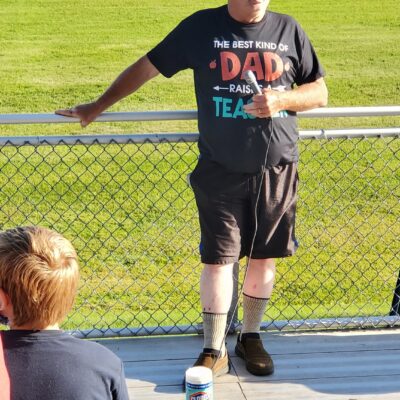 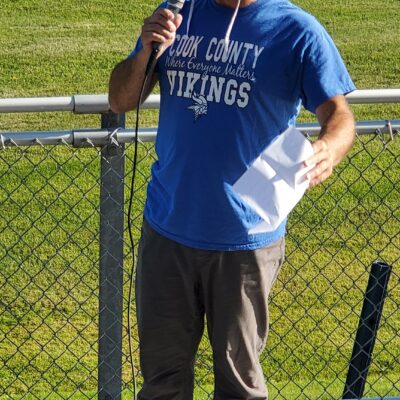