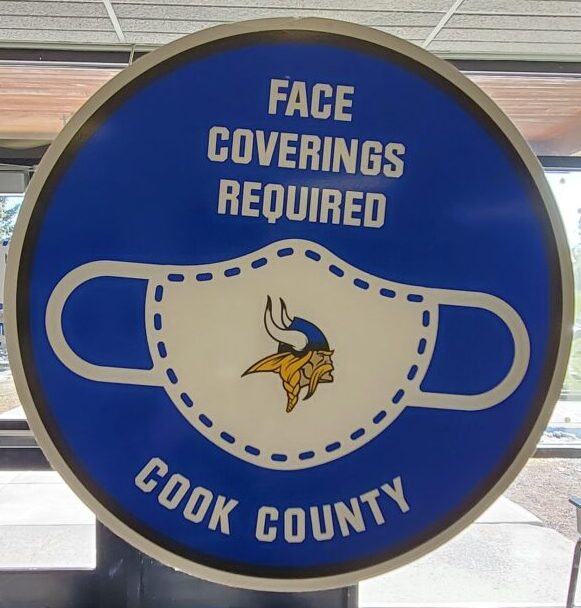 Discussion of the requirement for School District 166 students and staff to wear face coverings was not on the agenda at the Thursday, February 16 school board meeting. However, it was brought up in the public comment period at the start of the meeting and discussion was added to the board agenda. Any decisions on changes to the requirement, or the policy outlining the use of face coverings at the school, was instead deferred to a special meeting on Thursday, February 24, to allow public notice that the conversation would be taking place.

Superintendent Chris Lindholm told WTIP that the citizens who spoke during the public comment period advocated for the school to drop or suspend the policy requiring face coverings. Lindholm said a board member noted the public comment and asked that the topic be placed on the agenda and there was discussion of the continued need for masks at the school. However, because the subject was not on the agenda published in advance of the meeting, the school board said there may have been people with a differing opinion if they had known it was to be considered. So, a special meeting was set.

The special meeting agenda states that the purpose of the meeting is to discuss the school’s face covering policy–and the metrics to be followed to decide when to stop the requirement for masks in the school building. Asked if the board could act to lift the mask requirement for the school district, Lindholm replied that the school board could do that, they could delete or modify the policy. However, he said the agenda at this time calls to affirm or modify the metrics, the formula used based on the number of COVID-19 cases in the community, not to remove the mask requirement.

“I think they’re going to talk about the metric and where they want to land,” said Lindholm.

Lindholm added that there is good news in that COVID-19 numbers in the community are lower than in January. He explained using the metrics set by the school board in January, there must to be less than 15 cases per 10,000 people in the county for four weeks of reporting. Based on the county population, that means eight positive COVID-19 cases or less. According to Cook County Public Health, nine cases were reported last week.

“So, we’re really approaching that number,” said Lindholm, “Thus, it becomes relevant to discuss it.”

The numbers at the school are also much better, according to data compiled by Principal Megan Myers. Lindholm said looking district-wide at staff and students combined, back in January, the school district had 18; 25; and 22 new cases per week in the school system. And the last three weeks, the school had four; then three, and last week, just one new case.

Lindholm also spoke to WTIP about other actions at the February 16 school board meeting, such as a resolution of support for the Fully Fund Individuals with Disabilities Education Act or IDEA. Lindholm said this act was put into place by Congress back in 1975, to ensure that students with disabilities have access to free and appropriate education. At that time, Congress committed to funding up to 40 percent of the additional cost of special education. However, Congress has never fulfilled that promise. In fact, Lindholm said they have never funded more than 5 percent of the total cost of special education needs.

The board unanimously approved the resolution asking the federal government to fully fund special education in keeping with the intent of the act. Lindholm said this could have a huge impact on the school district, as now special education funds are subsidized by the general fund. He said if Congress voted to fully fund IDEA, School District 166 could see support of up to an additional $775,000 a year.

The school board also reviewed its agreement for cleaning services at the Cook County Community YMCA. He said under the agreement established about three years ago, the school custodial team provided cleaning for the YMCA. The county paid for the services, which allowed the school district to add a custodial position back. However, the school district is in the midst of a staffing shortage, so discussion of how to provide services has begun amongst the school, the YMCA, and the county. The school has advertised for the position and in the meantime, school staff is working overtime to cover the duties. Lindholm noted this is not a good situation, stating that staff is “burning the candle at both ends,” between maintenance and transportation duties.

Lindholm saluted the school employees for their hard work and gave a special thanks to the school bus drivers, as Wednesday, February 23 is “School Bus Driver Recognition Day.”

Lindholm said, “We’re just so, so grateful for their servant leadership to get our kiddos to school every day. They’re the first person our kids see in the morning and the last person they see in the afternoon and we just appreciate them.”

Lindholm added that School District 166 is looking for two people to join the bus driver team and encouraged anyone interested in becoming a driver to reach out to the school.

Lindholm also thanked the School District 166 school board, noting that February 21-25 is Minnesota School Board Recognition Week. Lindholm said, “It’s a week when we as a statewide organization take time to thank our school board members for their mostly volunteer leadership representing parents and families and communities.”

Lindholm said, “I want to say thank you to those fearless leaders for the work they do representing our public and working on behalf of education in the state of Minnesota.”

WTIP’s Rhonda Silence spoke with Superintendent about all this and more in this interview.