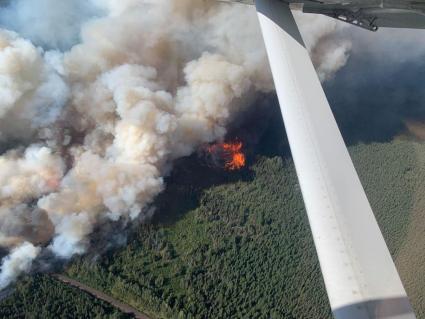 Section of Highway 1 closed due to wildfire in Lake County

UPDATE 6:05 a.m. Tuesday, Aug. 17: The Greenwood Fire near Isabella is now approximately 2,000 acres in size and remains active, according to the US Forest Service.

Fire behavior was observed to be extreme all day Monday. The forecast calls for mostly sunny skies behind a smoky haze, with a high near 88 in the Isabella area today. There will be a steady wind out of the south at 5 to 10 mph, with gusts as high as 20 mph.
The Forest Service says aircraft is being used to limit the fire spread to the north, including two helicopters, a plane, eight engines, two dozers and two tracked vehicles are fighting the fire.

A portion of Highway 1 was closed Monday near Isabella to help fight the fire and keep people out.

The Lake County Sheriff and Emergency Management went door to door to Monday to notify residents if they are in the evacuation area. The evacuation area is along McDougal Lake, the Highway 2 corridor near Sand Lake, and just north of Highway 1.

Approximately 75 residences have been affected by the evacuation.

Monday, 6:05 p.m — Minnesota Highway 1 between Ely and Isabella was closed this afternoon due to a wildfire burning in the area. Lake County Highway 2 was also closed.

The size of the Greenwood Fire in Lake County was estimated to 1,500 acres and it continued to grow as Tuesday afternoon moved into the evening hours, according to the US Forest Service.

Superior National Forest officials warned that the fire could continue to spread quickly due to high winds and dry conditions. The cause of the fire remains under investigation, according to the Forest Service. Law enforcement in Lake County said Sunday night it is likely the fire started from downed power lines.

Fire crews and additional aircraft are being brought in from across Minnesota and other parts of the country to assist with the Greenwood Fire.