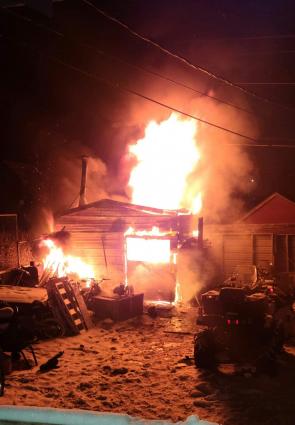 A woman in Grand Marais called the Cook County Sheriff’s Office at 7:41 p.m. on Friday, December 18, reporting that her neighbor’s garage was on fire.

A sheriff deputy arrived at 114 West Second Street at 7:50 p.m. to find a shed fully engulfed in flame behind the residence. The deputy reported that the burning structure was near an adjacent house and a propane tank.

Grand Marais Public Utilities was paged and responded to cut the power to the burning structure.

The Grand Marais and Maple Hill Fire Departments responded and attacked the fire from the street and alley. The fire was under control by 8:06 p.m., but there was significant smoke as the fire departments made sure the blaze was completely out. All responders were clear of the scene by 9:11 p.m.

The structure was a complete loss. The cause of the fire is not known at this time.