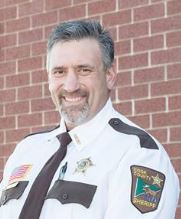 As Minnesotans followed from afar as a mob stormed the U.S. Capitol in Washington, D.C. on Jan. 6, WTIP spoke to Cook County Sheriff Pat Eliasen to see if he had any thoughts for the community. The sheriff was a reassuring voice that evening.

In recent days there have been news releases from the FBI, warning of the possibility of more violence in the days leading up to the inauguration of President Joe Biden. The reports have stated that armed rallies are planned for the Capitol buildings of all 50 states, as well as some local county and city buildings across the country.

While law enforcement is prepared, Minnesota Department of Public Safety Commissioner John Harrington told KSTP News that there aren’t any current credible threats on the State Capitol. Harrington noted there was an FBI bulletin in December that listed a possible threat at the Capitol but said “things change” and there aren’t any current credible threats, although law enforcement continues to look for possible threats.

Two events are scheduled at the Minnesota State Capitol Complex this weekend – a “Freedom Fest” on Saturday and a “Sunday Church Service.” According to a Star-Tribune report, Becky Strohmeier, an activist from Bloomington who leads the Hold the Line MN group, is the permit holder for these events.

Safety Commissioner Harrington said he and law enforcement will protect Minnesotans’ rights to free speech and demonstrations as long as those are peaceful. However, he warned anyone planning to show up and commit violent acts. “If you come to the Capitol with criminal intent on your mind, if you come to the Capitol to commit violent crimes, we will stop you and we will hold you accountable,” Harrington said in the press conference.

WTIP reached out to Sheriff Eliasen again, to learn what the sheriff had heard about potential violence and what he has to say about it.
Here’s Rhonda Silence with the sheriff.