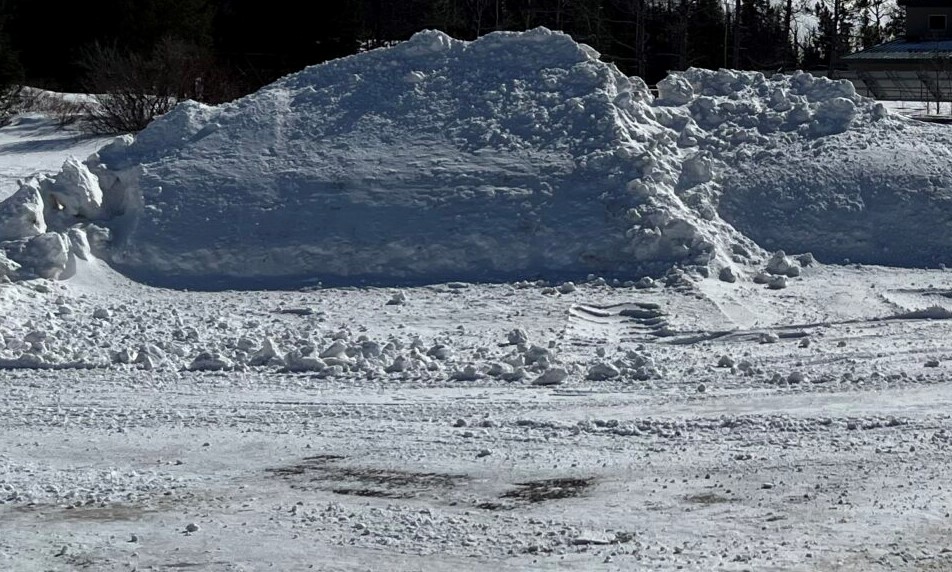 Snow removal a tough topic for city of Grand Marais

The Grand Marais City Council met on February 23 and much of the conversation centered on snow and the fact that everyone is running out of places to put the snow removed from parking areas and alleys. The council also had a lengthy conversation regarding the possible sale of city property and approved a one-year AFSCME contract with employees.

Snow removal a problem for all

What to do with all the snow that has accumulated in downtown alleyways was brought forward at the February 9 meeting when Visit Cook County Executive Director Linda Jurek asked for the city’s assistance in clearing the alley that runs between the Grand Marais Dairy Queen and Visit Cook County and the Johnson Heritage Post and the GunFlint Tavern. Jurek noted that this is a very busy alleyway, used for deliveries and downtown traffic. She noted that the alley has become increasingly narrow despite the efforts of the businesses in the area to keep it clear. She said this is a safety concern, as in an emergency it would be difficult for responding vehicles to use the alley. Jurek asked the city to work with the contractor to help remove the snow.

Although it was noted that typically the city street department does not clear alleys, the council said it would invite City Property Maintenance Director Lenny Bloomquist to the next meeting to find out if his department can work with the property owners in some way.

Bloomquist appeared at the council meeting via Zoom and confirmed that the city does not clear alleys other than the one next to Grand Marais City Hall. He also said it would be extremely difficult to allow businesses to push their snow out into the street for his crews to then move to the city’s snow storage at The Point and/or the municipal parking lot. He said the street department is having a hard time keeping up with the city streets and sidewalks.

Councilor Anton Moody asked if employees from other departments could be reassigned to assist and City Administrator Mike Roth said that is already being done.

After Bloomquist repeatedly said the city cannot take any more snow, the council agreed to keep things status quo for snow removal in alleys. The business owner will be responsible for clearing its alley and parking area, including hauling the snow away.

Councilors noted this is a problem this year because of the significant snowfall that has been fallen. Councilor Tracy Benson asked city staff to be sure to notify property owners of the city’s policy, adding, “We need to communicate in a kind way.”

The council also gave kudos to the city street department, noting that with all the snow that has fallen this year that has been their sole task trying to keep up.

There was significant discussion of the possible sale of the city-owned lot located at 1800 West Highway 61, west of the city’s public works facility on the Highway 61 corridor.

Former City Councilor Tim Kennedy of Gunflint Properties was at the meeting to discuss a purchase agreement to buy the lot for $95,000. However, he had concerns about some of the language in the purchase agreement, primarily over the access to the lot on the driveway that goes past the lot, to the city’s public works facility. Kennedy said he wants a permanent easement, but City Attorney Chris Hood said that is not something that governments grant. Hood instead developed a license agreement, which grants use of the roadway, but does have a termination clause. Despite reassurances from the attorney and city council that if the city ever terminated use of the road, it would have to provide other access, Kennedy said he could not move ahead with the purchase. He will consult his attorney and return to the council if he wants to proceed.

In July 2021, Kennedy suggested that the city obtain an appraisal in case interested buyers approached the city. At that time, he said he had very tentative plans for a new business, a bike shop, and he said the city property could be a good location for that. Kennedy told the city council that if the lot came up for sale, he would be interested. At this latest meeting he expressed frustration that the city seems to be putting up “obstacles” to the sale, which would establish a new business and put the property back on the tax rolls. See related coverage of this land sale here.

The council reviewed and accepted a contract with AFSCME employees. Due to the uncertainty of finances as the COVID-19 pandemic lingers, the contract is for one year only. In the contract, the city workers will receive a 5 percent salary increase and some adjustments to how vacation is accumulated and use. The new contract also calls for establishment of an employee assistance program.

After approving the union contract, the council voted to extend the same wage increase and benefits to the city’s non-union staff members.

In other news, Kay Costello was appointed to the Grand Marais Park Board.

WTIP’s Rhonda Silence spoke with Grand Marais Mayor Jay DeCoux after the meeting to learn more about the city’s actions. Here’s their conversation.