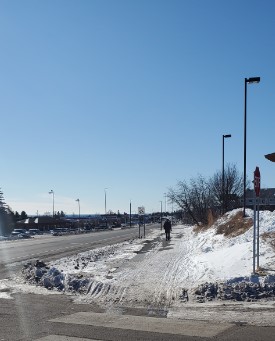 The route for snowmobiles entering the City of Grand Marais has been discussed by the Grand Marais City Council at the last three meetings. It was on the agenda again on February 10, with public comments that are practically polar opposites about how the route should be maintained.

On January 13, a business owner asked the city council to revisit the change made during recent Highway 61 work. At some time during the Highway 61 planning process, it was decided that the snowmobile route would be moved to the lower (south) side of Highway 61.
However, the commenter who raised concern said there is no way for the snowmobile groomer to groom the trail on the lower side because of the width of the grooming equipment. That was confirmed when the city received a letter from the Cook County RidgeRiders Snowmobile Club at their next meeting on January 27.

The snowmobile club said it had been unaware of the change made during the road construction process and asked the city to return to the original layout that they say has worked for years.

The snowmobile club gave a number of reasons, noting that the snowmobile trail groomers are nine feet wide–wider than the path they are supposed to take, which is 8.5 feet wide. The club said, in addition, there are mailboxes and signs on that route that create a hazard for snowmobile riders.

In the letter, the snowmobile club noted that it had been using the north side of the highway, packing it for snowmobiles and foot traffic for over 15 years with no known accidents. The club also shared concern about snowmobilers crossing at the corner of the Gunflint Trail and Highway 61 where the 40 mile per hour zone begins. They said it is not safe for snowmobiles to cross at that point.

The matter came up yet again with more public comment on February 10. The council first read a letter from a snowmobiler who urged the city to leave the snowmobile trail on the upper side of Highway 61. The writer described their enjoyment of snowmobiling and reminded the council that snowmobile tourism is a primary driver of commerce in the winter months. The writer explained their concern about crossing the highway at the Gunflint Trail and Highway 61 intersection. The letter writer ended by saying, “In my mind, the path from gas to the trails must remain on the north side of 61. Surely, creative people can come up with a way to keep everyone safe and contentedly co-existing—safety and directional signage, barriers between sled path and pedestrians, maybe adjustments to the route, but PLEASE do not force riders to cross 61!”

Another writer, who described themselves as a “serial pedestrian” expressed disappointment that the decision to return snowmobiles to the route on the upper side of Highway 61 was made with “little to no discussion.”

The writer asked if other measures could be used to make a snowmobile crossing at the Gunflint Trail safer, such as a traffic light or a reduced speed zone.

The letter ended, “I am urging the City Council to reconsider their snow removal policy and give more thought to the safety of pedestrians.”

The council agreed serious thought needed to go into this trail situation, so the same concerns aren’t raised year after year. It was also noted that neither side of the highway had been cleared. The council said they would consult with the city street department about that.
Street Superintendent Len Bloomquist is on the agenda for the February 24 council meeting to talk about sidewalk clearing.

Park and Marina report
Grand Marais Parks and Recreation Director Dave Tersteeg gave an update on activities at the municipal campground and marina, refreshing the city council’s memory on the process undertaken to develop a Park Master Plan in 2009.

Tersteeg noted that the Park Master Plan had specifically stayed away from any development on the waterfront, as there had been some conflict in the community over the idea of a Minnesota Department of Natural Resources Safe Harbor.

Since then, the park has been working with the DNR on improvements to the boat launch area of the campground. The DNR sought and has been approved for approximately $2 million dollars in state bonding for the project which will include an expanded parking area, improved boat launch, and an addition to the inner break wall. The break wall improvements will convert the rubble wall to create a walkway.

The council noted that this is a DNR project and the city has not contributed funds. Although the construction of the new public utilities building on West Highway 61 came about in part to allow space for the boat launch improvements.

Tersteeg said bids had been let and the DNR should know the results soon. The plan for the work includes bringing in materials for the project before spring road restrictions begin.

What’s ahead for the city

The next Grand Marais City Council meeting will be Wednesday, February 24 at 6:30 p.m. In addition to discussion of Highway 61 sidewalk maintenance, the council will hear an update from the Creative Economy Coalition (CEC), the citizen group planning for artistic amenities along Highway 61. A review of the city administrator’s job description is also on the agenda. The meeting can be viewed on the city’s YouTube channel via a link on the city website
WTIP’s Rhonda Silence spoke with Grand Marais Mayor Jay Arrowsmith DeCoux about all of this and more.