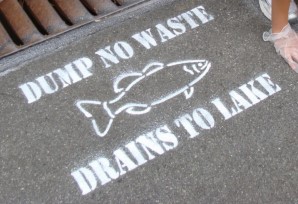 Stormwater and art on the City’s agenda

The arts, and the art of stormwater, were on the Grand Marais City Council meeting at the March 10 meeting. WTIP’s Rhonda Silence checked in with Mayor Jay Arrowsmith DeCoux to talk about both.

The Creative Economy Collaborative (CEC) was first on the agenda with a request for support of an art project to focus on the Highway 61 road construction this summer. The CEC plans to use the theme of “detour” on signs scattered throughout the city as the road work gets under way. CEC representatives Ruth Pswaro of the Grand Marais Art Colony and Cook County/Grand Marais Economic Development Director Mary Somnis explained the concept, telling the council that the signs will ask people to slow down and think about a time when they took a detour in life. There would be no cost to the city, but CEC asks for a letter of support. The city council passed a motion of support for a grant and agreed to serve as the fiscal agent.

Stormwater was the next topic and that was the discussion for the rest of the council meeting. Ilena Hansel of Cook County Soil and Water gave an overview of the city’s plan and asked the councilors if there was anything they wanted or needed to change at this time.

Art came back into the discussion with the next stormwater item Theresa Oberg with Soil & Water introduced the idea of a stenciling project, which would decorate the storm drains throughout the city with a reminder that what goes in the storm drain flows directly down the hill into Lake Superior. The plan is to have a consistent and attractive look for these stencils. The stencils would have slogans such as “Dump No Waste – Drains to Lake” or “Only Rain in the Storm Drain.”

Speaking next was Phil Lars0n of Soil and Water, along with Matias Valero, a stormwater engineer. They shared information on the large holding pond at the 8th Avenue entrance to the Grand Marais Campground. There are some problems with the holding pond, which is not working as well as it could. Valero said the pond is adequately sized, but with a small outlet, it is causing some erosion. Valero shared two options for correcting the issue.

The project has received grant funding from the Minnesota Lake Superior Coastal Program, the One Watershed One Plan Program and the U.S. Army Corps of Engineers.

Both options would require routine maintenance similar to the existing pond. Larson said the most significant maintenance task would be removing sediment settled in the basin to maintain performance and prevent damage to the pond during flooding.

After discussion, the city chose Option 1, noting that there is grant funding to cover most of the costs.

The city talked briefly about the request from Go Dog North Shore to get started an constructing a fenced dog park on the Sawtooth Bluffs area. Discussion on the Sawtooth Bluff plan has stalled somewhat, but City Administrator Mike told the council meetings have begun again. There is now talk of perhaps finding another location for the dog park, as a driveway and parking area is needed before anything happens at Sawtooth Bluffs
.

There was a brief discussion of the dog shelter near the boat launch at the Grand Marais Recreation Park and the fact that it needs to be moved soon. The boat launch improvements should be starting this spring. Mayor Jay Arrowsmith DeCoux said Cook County Sheriff Pat Eliasen has taken the lead on that situation.

WTIP’s Rhonda Silence and Mayor Arrowsmith DeCoux had a more indepth conversation on all of this in this interview.