The first firefighters arriving on scene reported that flames were coming out of the attic and windows of historic building. By 1:36 p.m., it was reported that the building was fully engulfed in fire.

Firefighters from Gunflint and Maple Hill Fire Departments responded to the fire laying hose and battling the fire for several hours. At about 4 p.m., the Gunflint Fire Department released some responders from the scene and said the fire was in the “mop up” phase.

Early reports indicate this may have been an electrical fire, but that has not been confirmed by the Cook County Sheriff’s Office or fire departments.

As of 3:20 p.m., Gunflint Lodge posted information that “all staff and guests are safe and were not directly affected by the fire.” 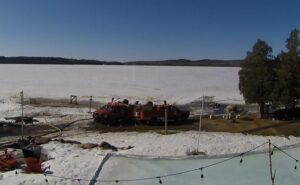 The Gunflint Lodge webcam shows firefighters working to get water from Gunflint Lake to fight the fire.