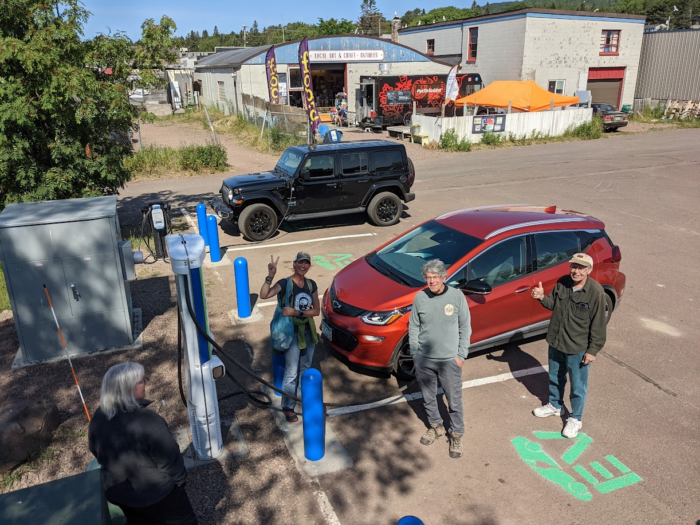 One year later, the city of Grand Marais is happy to report that the electric vehicle (EV) charging stations are a success.

WTIP’s Kalli Hawkins checked in with Shane Steele, the sustainability coordinator for the city of Grand Marais, on the one-year installation anniversary for an update.

Steele said, “There have been 604 charging sessions.”

In addition, Steele shared that the EV charging stations have brought in $5000 in fees over the past year.

While the city didn’t identify any annual goals for the EV charging stations, they are happy with the results and look forward to seeing what the rest of the busy summer season will bring.

Steele tells WTIP that the city currently has two “level 2” stations and one “DC fast” charging station. The level two station can charge two cars at once and would typically charge an electric vehicle (EV) in three to five hours.

The level two chargers produce a slower charge and are available for charging at $2 an hour. In contrast, the fast chargers have a $5 connection fee, with a 30 cents a minute rate.

The city has established an incentive program for EV owners who are Grand Marais Public Utilities customers to charge during off-peak times. The city is offering a special rate to EV owners to charge between 11 p.m. and 8 a.m.

“The incentive is to try to shift some behavior so that we don’t have such high spikes in electricity demand,” said Steele.

The city has received interest from four EV owners in joining the pilot program. The city is looking for one more participant to sign up.

WTIP’s Kalli Hawkins spoke with Shane Steele, sustainability coordinator for Grand Marais, for an EV charging update. Audio from the interview is below.

City North House Folk School aims to purchase city owned property that is currently leased Read More
©2022 WTIP | Website Design & Development by W.A. Fisher Interactive. Report Problems.
We use cookies to offer you a better experience, analyze site traffic, and serve targeted advertisements. By continuing to use this website, you consent to the use of cookies in accordance with our privacy policy. X