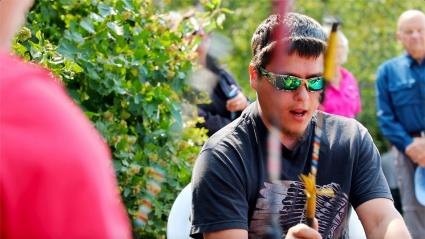 A special gathering of members of the Grand Portage community and National Park Service staffers was held on the island on July 23, 2019. At that event, the Grand Portage Band of Lake Superior Chippewa presented a Grand Portage flag to be flown along with the United States flag at the dock at the Windigo Ranger Station.

The request was honored on August 17 when Grand Portage community members again came to the island via the Grand Portage-Isle Royale Transportation Line’s Sea Hunter. On arrival at the dock, an empty flagpole greeting the party.

That was soon rectified. National Park staff, Grand Portage community members, and some surprised Isle Royale campers pleased to be witnessing a historic moment gathered for a brief ceremony.

The Stonebridge Singers started things off with a drum song. The members in attendance for the day’s ceremony were Brent Sorenson, John Vogel, Tanner Hendrickson, Trevor Deschampe, and Bob Vogel. They were joined by Eugene Boshey of the Grand Portage National Monument.

An elder, David “Niib” Aubid, blessed the occasion and those in attendance with a special pipe ceremony.

Tim Cochrane, a retired National Park Service superintendent, who worked closely with the late Tribal Chair Norman Deschampe to see the official recognition of Isle Royale as the Band’s traditional and cultural land, spoke. He shared some of the history of the removal of the Grand Portage people from the island.

Grand Portage Tribal Chair Bob Deschampe, along with his father, Duane “Butch” Deschampe approached the empty flagpole and together, with the Stonebridge Singers offering a song, raised the flag of the Grand Portage Band of Lake Superior Chippewa. The flag unfurled and snapped in the breeze against a bright blue sky.

Grand Portage Tribal Council Member John Morrin shared some words about the significance of the day, thanking the National Park Service, but stressing that Minong—the Ojibwe name for Isle Royale—has always belonged to the Anishinaabe people.

Isle Royale National Park Superintendent Denice Swanke thanked the people of Grand Portage for returning for a second ceremony, to celebrate the raising of the flag gifted to the park in 2019.

The Stonebridge Singers offered another drum song and all in attendance—elders first, of course—gathered for the feast of wild rice, fry bread, berries, and fish.

There are four symbols in the seal, a turtle, an arrow, a caribou and a pipe. Gagnon said each symbol has a different meaning. The turtle represents “Turtle Island,” which is the center of the universe for the Anishinaabe. The arrow represents hunting for subsistence for the survival of the Grand Portage people. The caribou represents the caribou clan, of which many Grand Portage band members are members. The pipe is a sacred emblem of peace, representing the smoking of tobacco and spiritual practices.

Finally, the circle on the flag is the circle of life and the white lines represent the Four Directions.

WTIP’s Rhonda Silence was honored to be part of this special celebration and she shares this report. 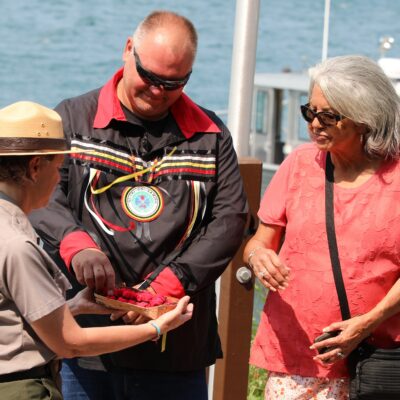 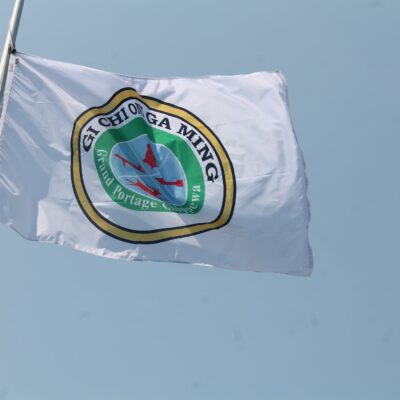 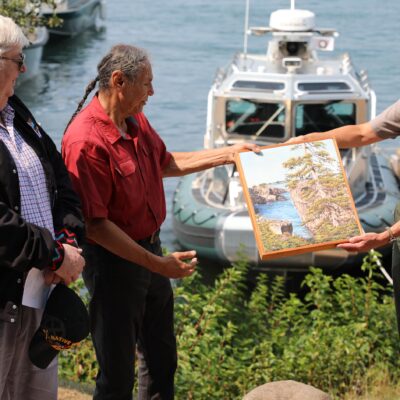 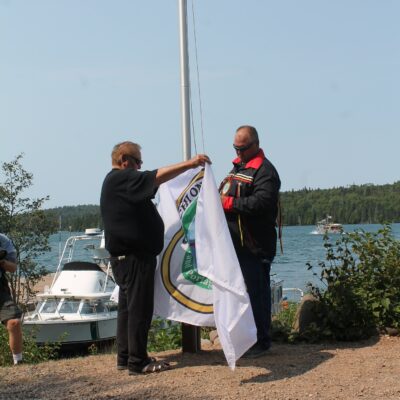 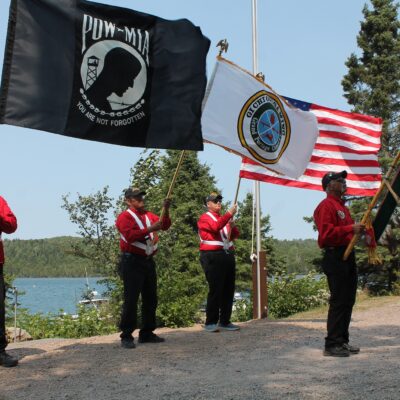 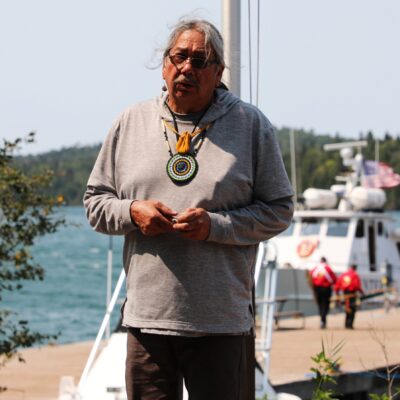 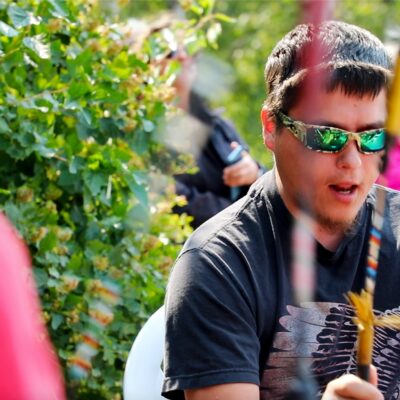