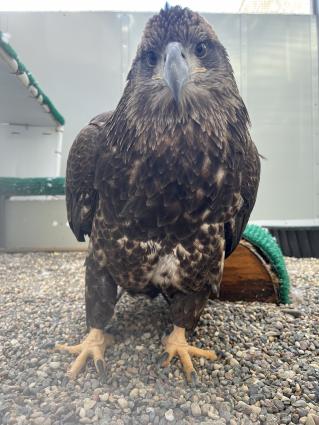 The Raptor Center shares an update on Lutsen eagle

Back in August 2020, WTIP shared the story of a young bald eagle that caused quite a stir at Cascade Lodge. The juvenile eagle wandered around on Highway 61, landing on the emergency vehicles that were called to protect the bird from traffic and from a crowd of onlookers.

After several hours, the eagle flew off and many thought it would never be seen again. However, some US Forest Service staffers spotted the young raptor in Schroeder the next day and they were able to capture it. At that time, the eagle was taken to Wildwoods Wildlife Center in Duluth.

The eagle was eventually transferred to The Raptor Center at the University of Minnesota, where it has remained. Although not physically injured, the young female eagle, which has been named Lutsen, had come to view humans as its food source, so would it would not survive in the wild.

Lori Arent, assistant director at The Raptor Center, tells WTIP that this is, unfortunately, a common occurrence. She says when people find a young eagle that they believe has been abandoned, often the first instinct is to feed it. Doing so can break the bond between the juvenile bird and its parents and lead to just what happened with Lutsen.

When the young eagle was wandering along the highway near Highway 61 in Lutsen, she was probably just looking for food. Arent tells WTIP that she was about 4 ½ pounds underweight when she was captured. She was down about a third of her body weight. Arent says she was “physically and emotionally hungry.”

Lutsen is now an “education ambassador” at The Raptor Center.

Lutsen can be seen by visitors to The Raptor Center, which offers tours, both in-person (on a limited basis due to the COVID-19 pandemic) and online. Learn more on The Raptor Center website.

WTIP’s Rhonda Silence learns more about Lutsen’s condition in this interview with Lori Arent, assistant director at The Raptor Center