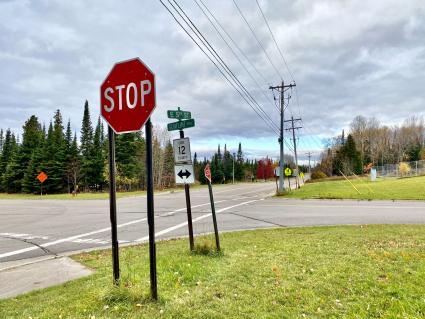 Motorists driving through Grand Marais on County Road 7 need to remember the wisdom of an old saying that goes like this: Look both ways before you cross.

As the Highway 61 reconstruction project tapers off for the year, both in and around Grand Marais, two intersections are proving to be areas of concern for local motorists.

One intersection with changes this week includes shutting down a temporary stop light at the intersection of County Road 7 and 5th Avenue West. This intersection is near the local hospital. A traffic light was controlling the flow of traffic at this busy intersection for most of the summer, though the light is now turned off and the standard two-way stop sign for motorists crossing 5th Avenue who are on County Road 7 is now the only control measure in place.

Resuming the normal flow of traffic at these two intersections led some local residents to raise alarm bells about safety. It’s understandable, perhaps, as for months the intersection was a four-way stop near Great Expectations and suddenly one day it wasn’t. The same applies to the intersection near the hospital that was controlled by a stoplight.

Earlier this year, the Cook County Board of Commissioners discussed these intersections and the flow of traffic on County Road 7 at length. Momentum and acceleration for large trucks carrying full loads were cited as reasons not to alter the flow of traffic, or at least to only do so for as long as necessary.

WTIP’s Joe Friedrichs spoke with Cook County Highway Engineer Robbie Hass about the return of normal traffic control at these intersections, as well as other news from the highway department. Listen to the audio below to find out more.