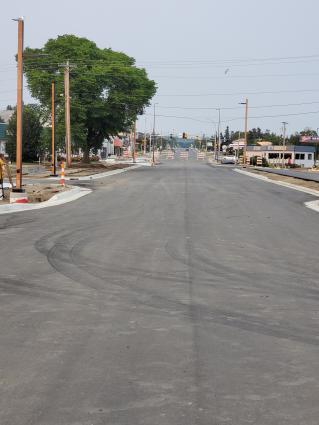 The City of Grand Marais met on Wednesday, July 14 and in the absence of Mayor Jay DeCoux, Councilor Kelly Swearingen served as acting mayor. WTIP’s Rhonda Silence spoke with Swearingen about the agenda items, some ongoing; some new.

An item that came up in the public forum portion of the meeting, which is when community members have the opportunity to address the city council on any topic, was the subject of traffic. Rebecca Thompson spoke passionately about her concern about the safety of pedestrians—children, in particular—that has followed what seems to be an increase in traffic in the residential areas of the city. The council thanked Thompson, who shared some solutions to speeding vehicles that run stop signs, such as signage and clearing vegetation at intersections.

The city council began the process of possibly selling some city property. Former City Councilor Tim Kennedy came before the council with a suggestion that the city consider selling a lot it owns next to its public works building on the west side of Grand Marais. The city purchased the land, which was the Tomteboda Resort, to construct the public works building and at that time considered selling the remainder of the property.

Kennedy told the city council that if the lot came up for sale, he would be interested. Kennedy said if he was able to acquire the lot he would like to build and operate a bike repair business there.

The council acknowledged Kennedy’s request and stressed that there are no plans to sell the lot at this time. However, the council directed city staff to research what needs to be done for a sale of city property to take place. In WTIP’s conversation with Councilor/Acting Mayor Swearingen, she reiterated that the lot is not being sold at this time. Once a determination has been made of how to go about selling the lot, it could end up being purchased by anyone, not necessarily Tim Kennedy.

The council had a follow-up discussion on the petition from businesses off 2nd Avenue (Grand Marais Dairy Queen, Johnson Heritage Post, the Gunflint Tavern, and others) requesting that the city upgrade and pave the alley area near their establishments. After receiving the petition, the council agreed to ask the contracted city engineering firm, LHB, to take a look at the area to see if this paving is feasible. There were concerns about drainage issues and underground utilities.

LHB got back to the city with an estimate of up to $3,500 to conduct a feasibility study for the work. The council said this begins the discussion. After the study is complete, the city will work with the property owners on possible assessments for the improvements.

The council also talked about the pending closure of the U.S. Coast Guard North Superior Station. This is concerning to many boaters and Councilor Swearingen suggested that the city council send a letter asking the Coast Guard to reconsider this closure. The council agreed and directed city staff to put together a letter for the council to review at their next meeting. The deadline for citizens to comment on this is August 3. The related WTIP story, with links and information on commenting, can be found here: Coast Guard plans to close North Superior Station in Grand Marais

In councilor reports at the end of the meeting, City Councilor Anton Moody said he had heard concerns about the noise of semi trucks using Jacobs Engine Brakes. The council talked about the city’s ordinance, which states that these braking systems should only be used in emergency situations. However, Moody and Councilor Swearingen said they are hearing these noisy brake sounds repeatedly. The council pointed to that issue, as well as the earlier public comments about traffic concerns in the city as something that should be addressed by the Cook County Sheriff’s Office. It was agreed that the city should sit down with the sheriff’s office to go through ordinances to see if there is anything that should be changed to make it easier for law enforcement to enforce the existing ordinances.

In other business, the City Council discussed the upcoming Fisherman’s Picnic event, on August 6-8. As Councilor/Acting Mayor Swearingen said the Grand Marais Lions Club is hoping to have “as normal” an event that they can. Lion Bob Spry told the council that not all the events would be taking place this year. There will not be the big inflatable children’s play areas. There will be the kiddie rides at The Hub, a parade, fireworks, the Tractor Pull and cutest puppy contest and of course, the Lion’s Fishburger Stand.

The city council unanimously approved street closures for the Fisherman’s Picnic. The usual streets will be closed on the lower side of Highway 61—First Avenue, Second Avenue, and Wisconsin Street.

The council also heard a presentation on Tobacco 21, the program that works to reduce the number of young people accessing tobacco.

WTIP’s Rhonda Silence spoke with Councilor/Acting Mayor Kelly Swearingen about all this and more.