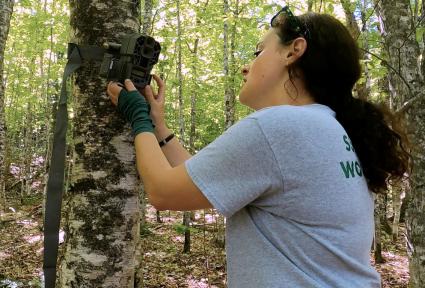 As she pulls the memory card from a trail camera along the Greenstone Ridge Trail at Isle Royale National Park, researcher Hailey Boone quickly comes across a number of noteworthy discoveries.

On the small electronic card, not larger than a size of a quarter, are thousands of images featuring moose, wolves, foxes and birds.

The 27-year-old Boone is a PhD student with the State University of New York. She and other researchers at Isle Royale, the remote island archipelago located about 22 miles across Lake Superior from Grand Portage, are using trail cameras to track the movements and certain behaviors of animals at the least visited national park in the nation.

In addition to pursuing her PhD, Boone is a graduate research assistant with the Global Wildlife Conservation Center. In 2019, the group installed more than 150 trail cameras in remote pockets of the park and along its hundreds of miles of winding trails. Boone says the cameras were set up to document wolf distribution in relation to prey species and determine how wolves and other mammals respond to visitor abundance and distribution.

Over the course of 2021 and into next year, Boone and other researchers will continue monitoring wolf and moose populations with their partners to characterize their effects on this ecosystem and the success of the wolf introduction program, she says.

When it comes to the ground work involved with using the trail cameras at Isle Royale, it’s Boone herself who trudges across the park’s main island collecting the data from the trail cameras. She hikes through, rain, mud, dense forest, steep terrain and battles insects all summer while she works, often traveling more than 15 miles per day on foot. Because she has to carry heavy items such as batteries to keep the cameras functioning, her pack often weighs more than 60 lbs. The terrain at Isle Royale is tough for most hikers and backpackers, but most of them travel with lightweight gear. Boone’s work does not allow her such luxuries.

Though the movements of both wolves and moose are key components of the research Boone and others are doing with the trail cameras, another aspect is how humans influence wild animals on the island. To continue observing how people influence animal behavior at Isle Royale, Boone and others are asking visitors to the park in Lake Superior to use the Strava app when on the island. The app, popular with trail runners and other athletes, tracks routes and provides data that can be shared publicly or privately. By pairing visitor use patterns with a network of wildlife cameras installed on the island over the past two years, the study hopes to better understand the interactions between people and animals, Boone says.

While on assignment for WTIP in June 2021, Joe Friedrichs and Matthew Baxley traveled with Boone to a section of the Greenstone Ridge Trail to observe her collecting data from a series of trail cameras. Boone led the way down the winding pathway, using a GPS to guide her to the exact location of the cameras.

The audio below features some of what they observed along the way.