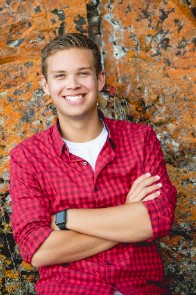 On February 5, the Cook County Republican Party held its county convention via Zoom. At that meeting, the local GOP elected Trent Spry of Hovland to serve as its chair–the youngest person to take on that position in Minnesota.

Spry is a 2020 graduate of Cook County High School, who has joined the Minnesota Air National Guard, assigned to the 148th Fighter Wing in Duluth. Spry is currently completing Air Force training at Sheppard Air Force Base in Texas.

When he returns to Minnesota, he plans to go to college in the Duluth area so he will be able to take part in his Guard training, as well as fulfill the role as Cook County’s GOP chair.

Spry agreed to speak to WTIP Community Radio from Texas to talk about why he decided to become involved with politics as a Republican. He said while he doesn’t agree entirely with all issues in the Republican Party platform, he agrees with “99 percent of them.”

Spry also shared his thoughts on the storming of the U.S. Capitol on January 6 and about the results of the 2020 election. Spry firmly stated, “I think it was totally unacceptable.”

Spry added that he does not know anyone who is a “true Republican” who has supported the people who stormed the Capitol.

Spry also talked about this summer’s visit to Cook County by Minnesota GOP Chair Jennifer Carnahan, sharing his thoughts on some of Carnahan’s comments at that gathering.

WTIP asked Spry for his thoughts on the wearing of masks at Republican events, about the unrest that followed the death of George Floyd at the hands of the Minneapolis police, about mining, and about the pro-life/pro-choice debate.

WTIP’s Rhonda Silence talked with Spry in Texas about all this. Here’s their conversation.