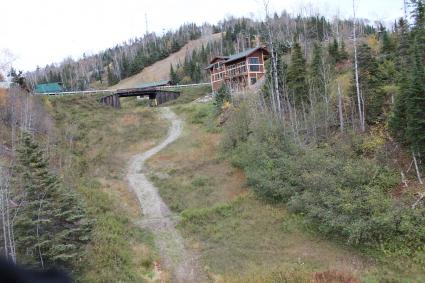 On Tuesday, October 5, the Superior National Forest is holding a virtual open house that could be one of the final steps toward a decision on whether or not to allow the Lutsen Mountains Ski Area to expand ski runs and operations onto nearly 500 acres of adjacent U.S. Forest Service lands.

The open house on October 5 from 5:00 to 7:00 p.m. will begin with a presentation from those who have been involved in the proposed project to date, followed by a time for questions.

To take part in the virtual open house, email joanna.gilkeson@usda.gov. Attendees will receive an email with information on how to join the open house by phone or by digital device through a browser or mobile app.

Although this virtual open house gives participants the opportunity to ask questions, comments on the project must be submitted in writing. Verbal comments provided at the open house will not be considered part of the official record.

Lutsen Mountains first applied for a special use permit that would allow the resort to expand its existing ski hill operations onto Superior National Forest land in December 2017. Lutsen Mountains is seeking approximately 50 acres on adjacent federal land, on what the ski area calls Eagle Mountain, and about 400 acres on Moose Mountain.

The U.S. Forest Service has issued its draft environmental impact statement on the proposed expansion. Comments must be submitted in writing, electronically or by U.S. mail, within 45 days of September 10, when a legal notice was published in the Duluth News Tribune.

In the draft environmental analysis, the Forest Service acknowledges that tribal involvement must be included in any decision. According to the environmental documents, the Forest Service initiated formal consultation with the three resident tribes in the 1854 Ceded Territory: Bois Fort Band of Minnesota Chippewa, the Fond du Lac Band of Lake Superior Chippewa, and the Grand Portage Band of Lake Superior Chippewa.

During the initial consultation, the Tribes indicated concerns about potential impacts to sugar maple stands and changes to land use and access that could result from the project. Specifically, concerns were expressed that the project may fragment and/or reduce the extent and productivity of mature maple stands (sugarbush stands) and white cedar stands, wild rice waters, and hunting/fishing resources. There were also concerns that the project would reduce the quantity of land available for individuals to hunt, gather, fish, and generally exercise the treaty rights provided by the 1854 Treaty.

The Cook County Chamber of Commerce submitted a letter of support for the proposed ski hill expansion on May 22, 2020, noting the economic importance of the recreation area to Cook County. The Chamber stated that Lutsen Mountains and the families which own it also have proven themselves responsible environmental stewards over the years, citing their work to see the Poplar River removed from the state impaired waterways list.

After the 45-day comment period, the Forest Service will review public comments and will revise the Draft EIS into a Final EIS based in part on that public input. When the final EIS is issued, it will include the Superior National Forest’s decision about whether or not to grant the special use permit to Lutsen Mountains.

If the special use permit is granted, the EIS will include information on which alternative the Forest Service will allow Lutsen Mountains to pursue.

Regardless of how you submit comments, the Forest Services asks that you please include your name, address, and the title of the project: Lutsen Mountains Expansion DEIS. Comments received (including names and addresses) will become part of the project record and are public information.

For further information about this project or questions about commenting, please contact Michael Jimenez, project coordinator, at Michael.Jimenez@usda.gov.

To revisit some of WTIP Community Radio’s previous coverage of this proposal, click below.

May 10, 2018 Expansion of ski hill leads to call for public meeting on treaty rights